The start of a VERY long project (railings).

Well, no good deed goes unpunished ya see…my insurance company sent the picture-dude out to see if we had actually done anything and their response was something like, “Meh. New roof. Whatever dude. Now…put porch railings on your house that meet modern building code or no insurance for you!”

Pity…all this technology and there’s still no, “Nuke the bastard on the other end of the phone” button on my smart phone. Sigh.

But what to do? Historic is out. It HAS historic rails…you can see them in this shot and they are still there (well, two south ones are missing): 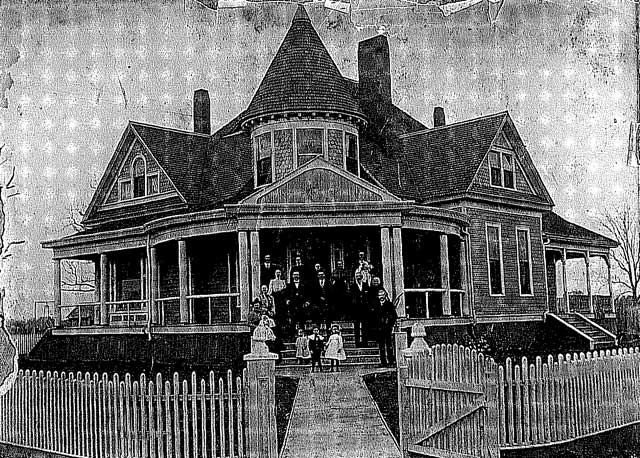 The Historic rails (I could EASILY replace the missing two…) 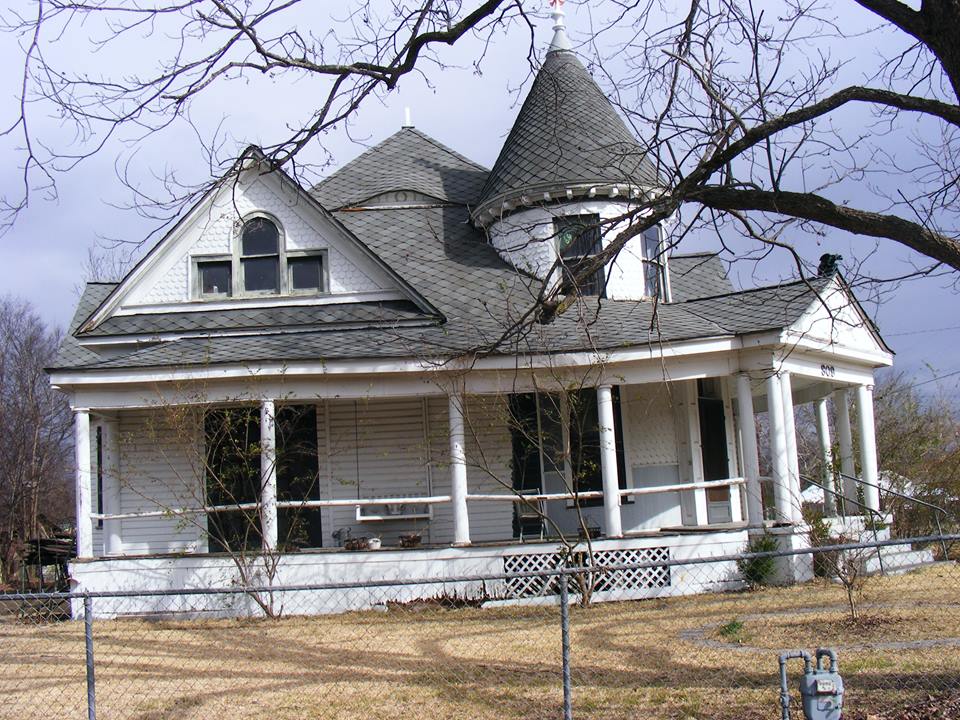 But the historic railings don’t meet code by any definition and some pour soul that is trespassing and has come through my secured perimeter fence might just fall the 30 inches off the porch into the hard grass below.

Hoops to jump through…100 feet of rails between 36 and 42 inches tall that you can’t pass a 4-inch ball through. See, irony of irony…railings are CHOKING hazards and have killed more children than a 30 inch fall into the grass ever will…

We were always going to change them though…the house is quite ornate and it seems they ran out of time/effort/money about the time to put the railings on it, (“Uh, HERE…take this here bodark branch I found out back, whittle it down a bit, and stick it on there. That’ll do!”)

But now? Why now?

And you KNOW it’s all connected, right? Can’t replace the railings till I repair a couple problems with the columns and porch (don’t want to build railings TWICE after-all), and level that thing over there and replace that rot and THEN I’ll need to address the underpinning and I can’t do the rear deck till I finish the planned EXPANSION on the rear deck and so on and….

Hmmm….but before I can install railings on the rear deck I need to replace the old stairway. It used to lead to an old single door that was rather haphazardly installed in a not-well built wall that was done WAY back sometime when they enclosed a porch. We replaced it (with a real wall, and the door turned to a window…and a double French door took its place (THAT project starts at this link and involves “Operation Coverup“) 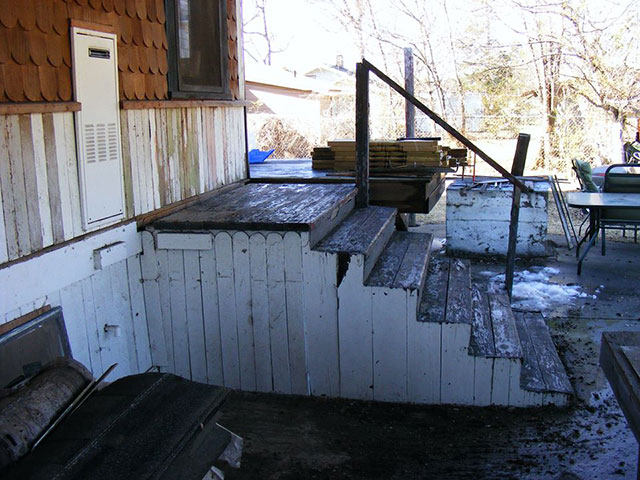 Now gone. That was simultaneously more difficult than I expected, yet disturbingly easy: 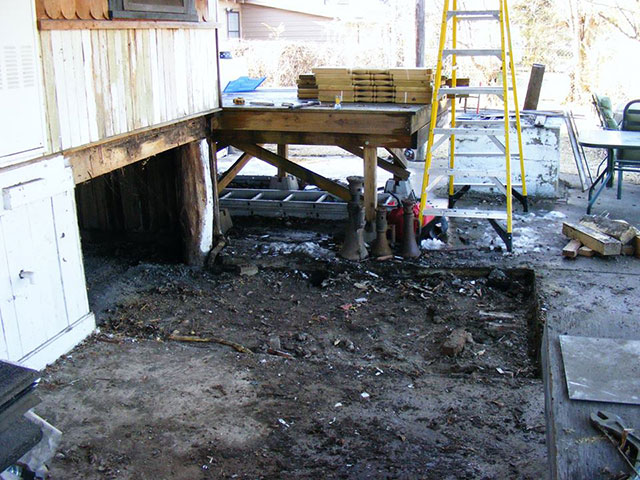 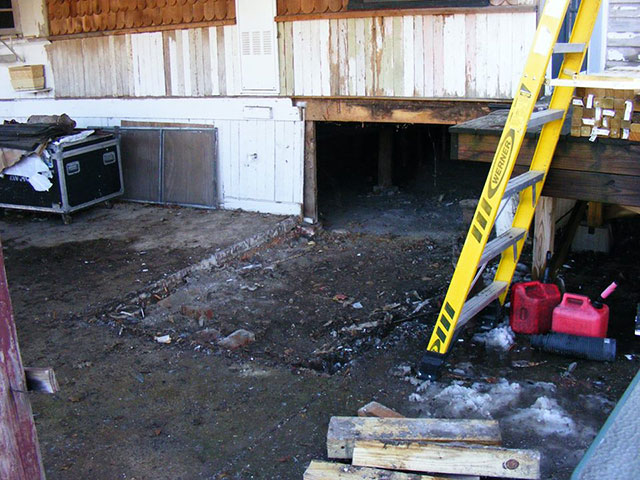 Gonna have to do something about the hole, yes? 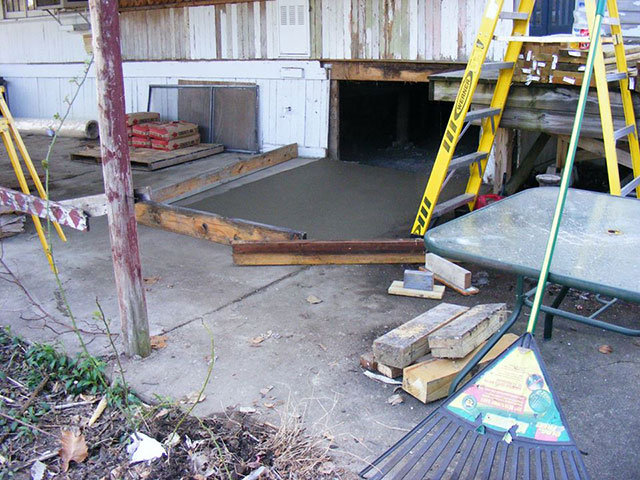 Despite days and days of rain, I finally managed to get the stairs up…and start on railings. 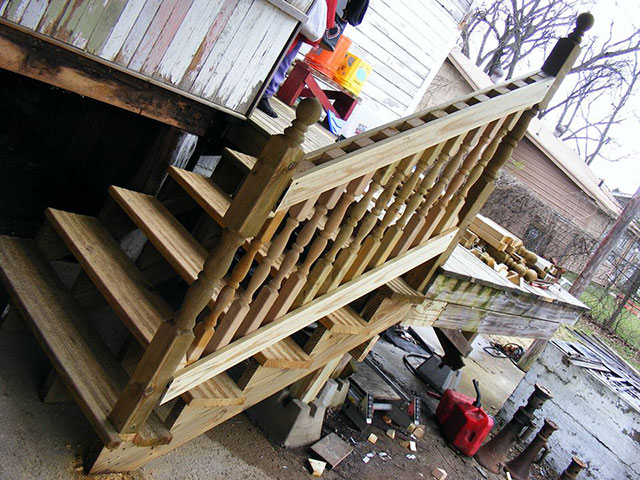 LOTS of fiddley-bits left to do here…top rail, trim, some braces etc…but this is enough to illustrate “the look” we’re going for. 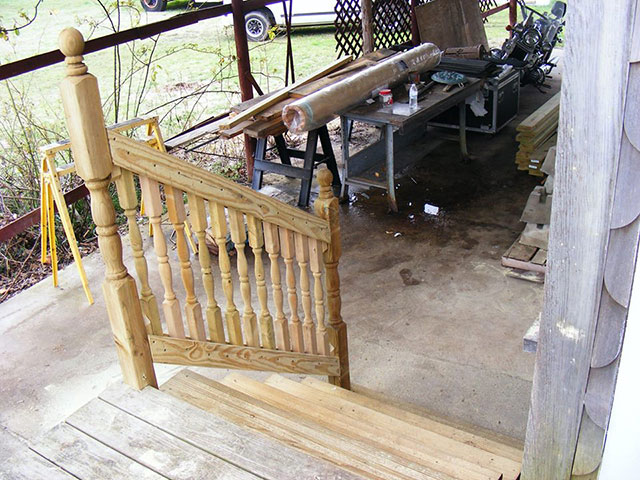 It was also enough to determine the method/materials needed to do the rest of the railings around the house. This was my “experiment” so to speak. 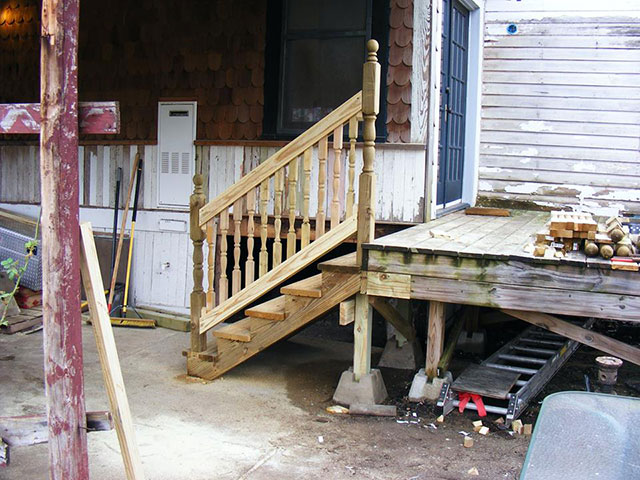 And I realized about 20 seconds after I took these pictures that the very first/bottom spindle was in upside down…so dragged out the screw gun again and reversed it.

Next, top rail, trim, etc…oh…and the minor project of a deck expansion…