Halloween was a success…

Heavy rain Friday kept us from decorating early, but the weather broke Saturday in time to get some of it done and have a nice Halloween night.

The spider in his web made his appearance of course: 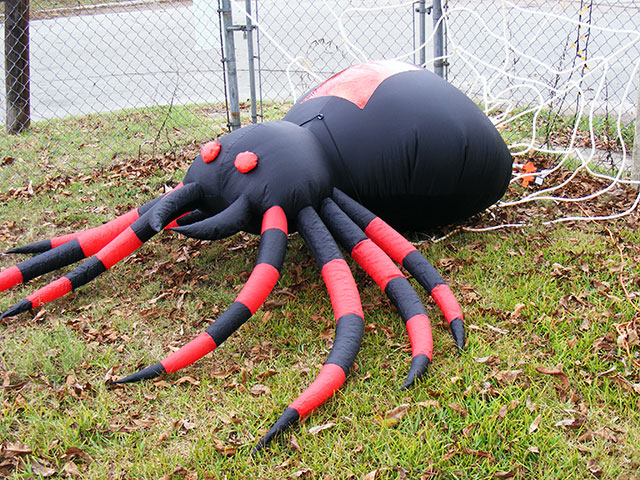 Six foot spider. His web is woven from 150′ of rope light.

The web is woven from 150′ of rope light and is amazing at night…alas we were so busy with trick-or-treaters I never took any night time pictures this year. (some older ones here)

The cats were hanging out as usual. The crouching one turns his head at random intervals…this does seem to startle the little kids and a few of the adults. 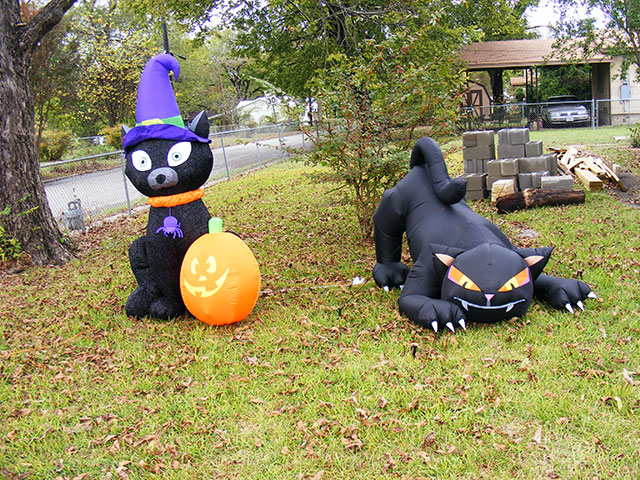 These are 8 feet tall/long or so.

And new this year…a dragon! He’s 12 or 13 feet tall and even flaps his wings! 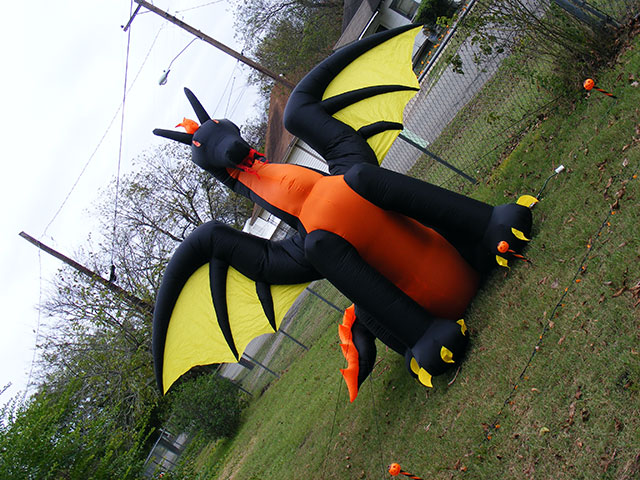 Dragon in the yard. I ain’t cleaning up after him!

One little boy wouldn’t come in the yard…he was afraid of the dragon…his *little* sister tells him,
“That’s not a real dragon.”
“How do you know?” says the shaky little guy.
“If it was a *real* dragon it would have eaten YOU already!” as she laughs and gleefully runs up to get her candy.

We also heavily decorated the porch…lots of glowing jack-o-lanterns, skulls, witches and such…oh…and the Medusa head that detects motion…her eyes glow red, her snakes wiggle, and she says things like, “Look into my eyes!” and such.

I’m thinking we had about 40 different things plugged in!

I again failed to take pictures of that stuff. Aw well, there’s always next year!

We had around 200 kids. Very polite, lots of great costumes. We saw tons of Ninja Turtles and at least as many Spider Mans (Men?) (not often ya need to pluralize a proper name…that happens to have a plural form when not used as a proper name…properly…or something like that)

Something over 50 pounds of candy and 150 real glow sticks were given away. The glow sticks ran out first, and the candy gave out at about 8:45pm (we are not stingy with it), so we shut it down.

I am a HUGE fan of the glow-sticks…we tried glow bracelets last year but they were dim and unsatisfying…so this year I sprang for real glow sticks…very bright and last for hours. They were a big hit and we could see them waving and wandering for blocks down the street. Very cool to get some light on those kids…cars and excited/hyper kids sometimes don’t mix well.

For us in attendance at the Old Vic, we then followed up with homemade chili and fresh homemade cornbread for a late dinner.

I even found me a busty pirate wench to drag off to my cave for the night!

Author. Adventurer. Electrician.
View all posts by Daniel Meyer →
This entry was posted in Miscellaneous, Yard. Bookmark the permalink.

One Response to Halloween was a success…