Day five dawns. I’m worried about my ladies. My woman is still in another city…a temporary crown gone wrong has given her some pain and an infection…and my house has a ways to go yet. The weather dudes have scheduled significant rain for tomorrow night. 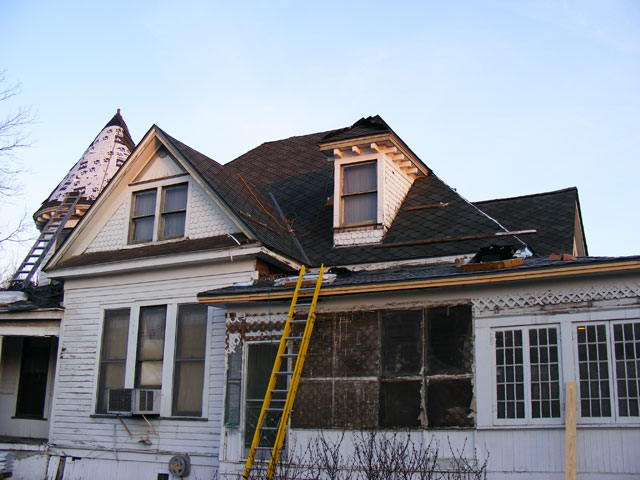 Very little sleep for me last night. I had a spire to repair you see. It’s quite large…just over 7 feet tall…and built of 50/50 soldered galvanized sheet-metal. It’s rusted and cracked practically in two near the center…and I had to fix it with materials on hand in just a few hours.

Fortunately I excel at these sorts of things…I like the challenge and the odd…and I tend to have a LOT of odd stuff on hand. 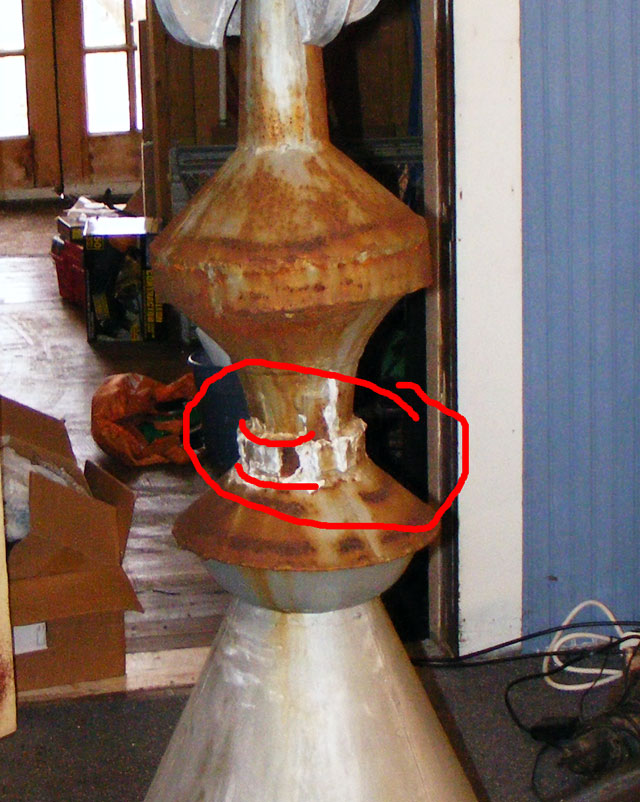 Now here…I must confess…I failed to take pictures of the process. I pondered for quite some time…dug around in my supplies and tools…and by the time I figured out what to do about it I was so focused on the project that I simply went to work…and didn’t stop until it was done.

Short of it is…I took my Dewalt Sawzall and whacked it in half…and that…my friends…took an act of sheer will. This thing predates anybody that’s alive today!

The thought…unbidden, “Good lord…what if I *can’t* put it back together?”

I then chopped a bit out (the rusted through part), and fabricated a replacement section out of galvanized flashing (same thickness as most of the existing construction) and finagled a couple reinforcing brackets to hold it all together again. A few sheet-metal screws, and then I cold-process zinced the thing. After that I cleaned up the new joint with some Bondo, and applied half-a-dozen coats of paint.

I did not finesse the finish too much (other than for durability) as the construction/soldering is kind of rough. The imperfections already there are much worse than any I left…and again…the thing resides some 40′ off the ground. 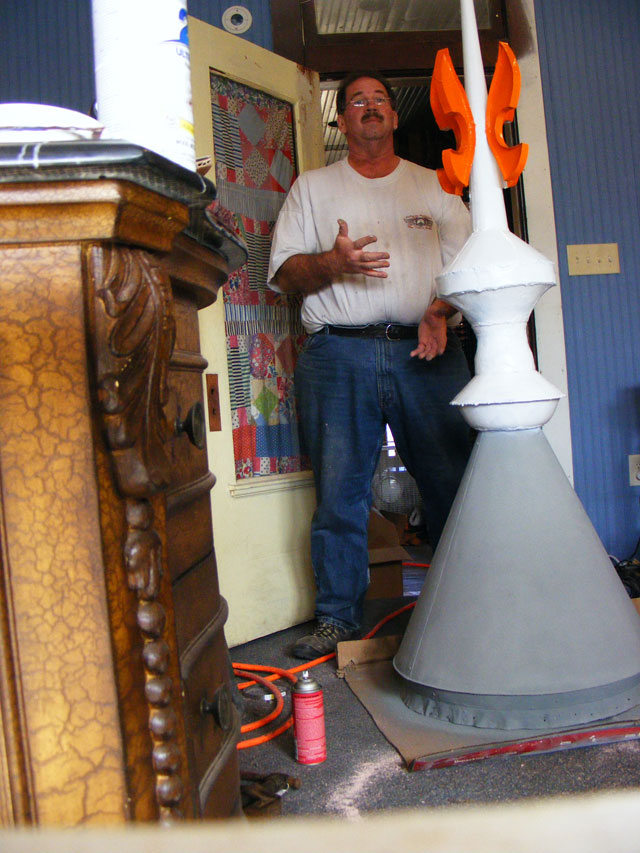 Ooo…pointy! I think I’m pondering it’s suitability as a weapon at the moment. Some artifact of the irregularities of that middle bauble makes it look crooked in the picture…but trust me…it’s straight. I used a two-way laser level to line everything up. 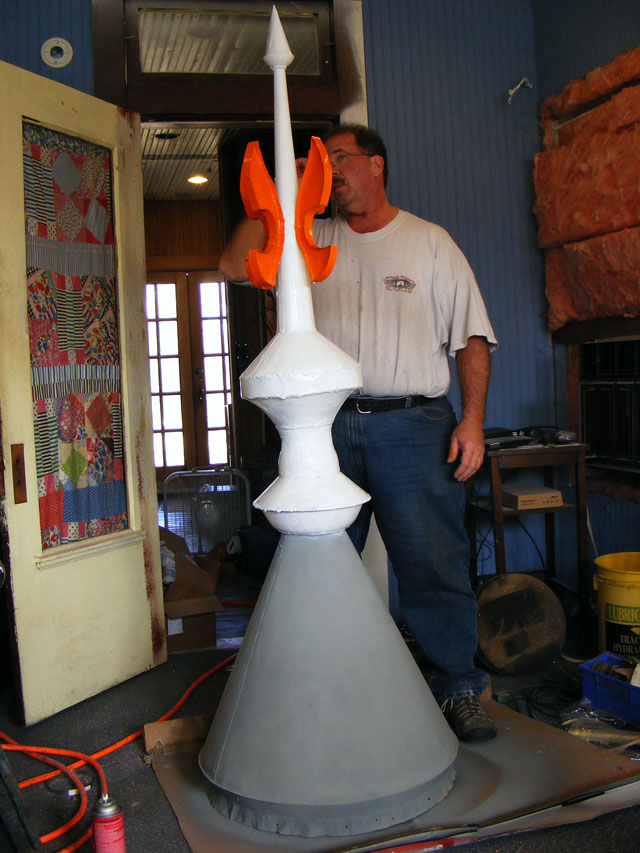 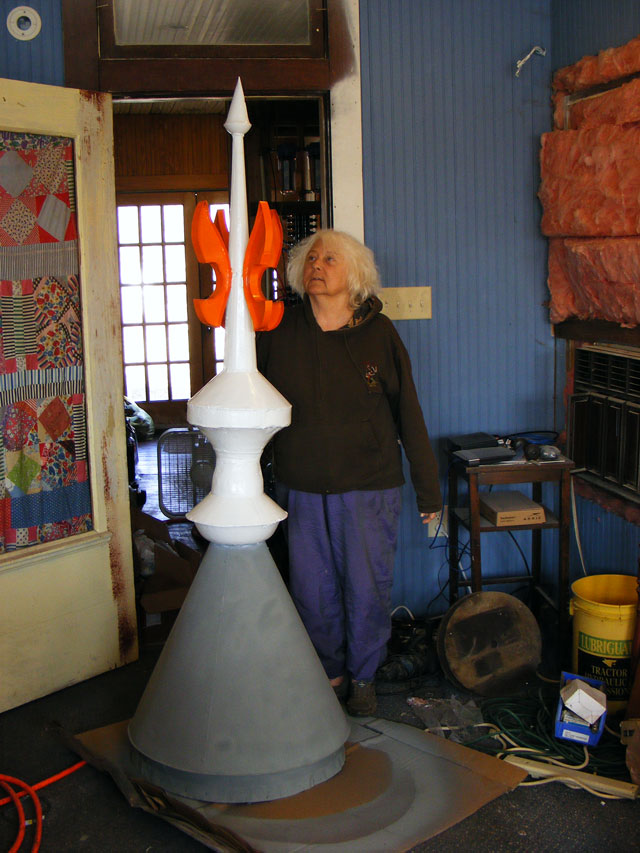 My Mom checking out the spire…just because I can.

Other than some fiddly bits they wrapped up the east side. 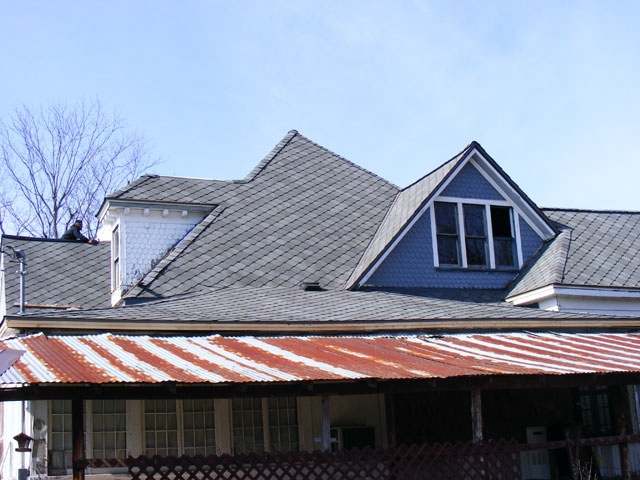 The east got done… 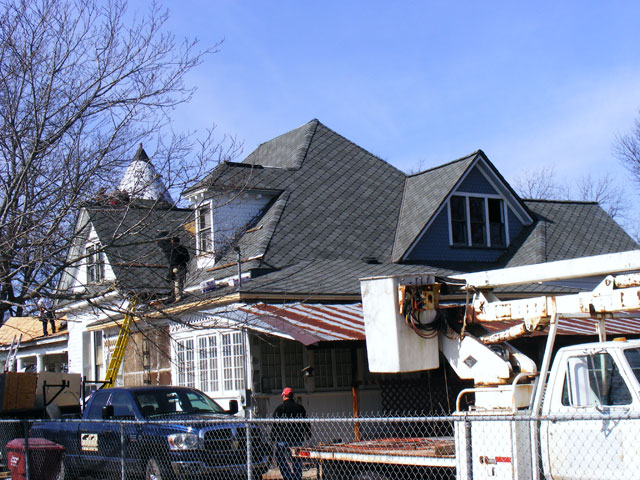 In short order even the west side with the difficult eyebrow was shingled. 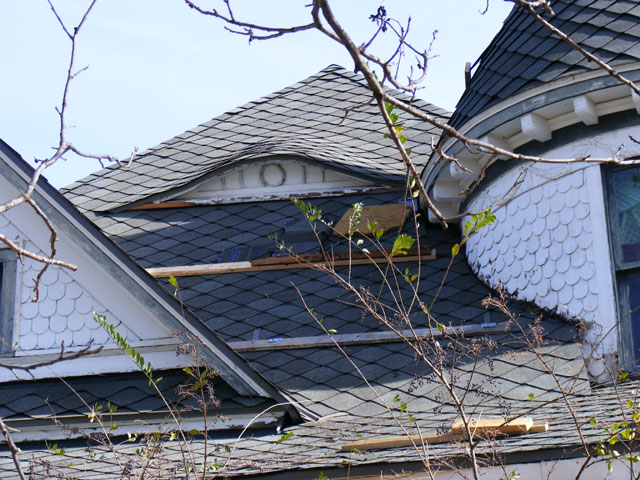 The eyebrow got shingled

They got the Cuernos del diablo back on in the early afternoon. 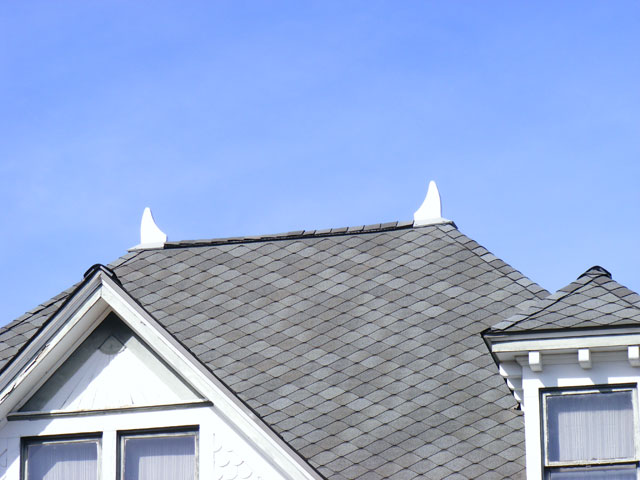 Tower work had started late yesterday evening…and continued today…but they rapidly figured out that putting THAT shingle on a cone was substantially different from the experience the tower guys they had with them had. It progressed slowly. 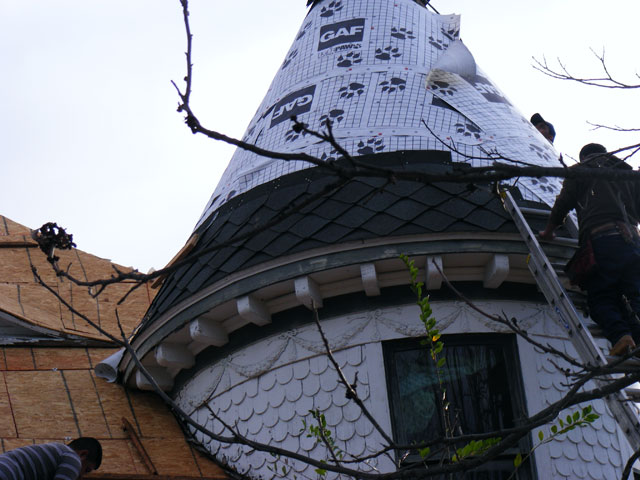 Most of the guys were tackling “fiddly bits”…getting flashings and hip roofs correct…was well as ridge vents, more work on the eaves, and cutting in some soffit vents. There is also a small section of flat roof between the two northern dormers that had to be rebuilt.

The roof is substantially done. They tell me come hell or high water…they will be rain-tight tomorrow before the weather moves in.

My terrification level has dropped to about a 2…I like what I see…and I believe them.