Always something to fix…

Hmmm…that can *not* be good.

Sooo….a couple weeks ago I had the Left-handed Fargle-snorker up on the square to hang a new banner for our store.

Had to take the old banner down: 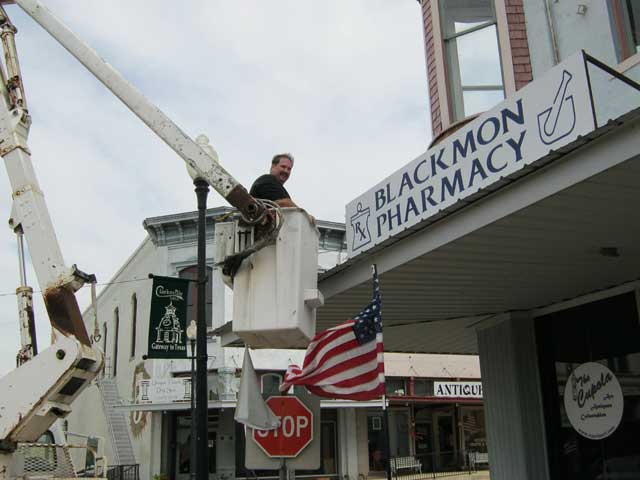 And then roll out a new one: 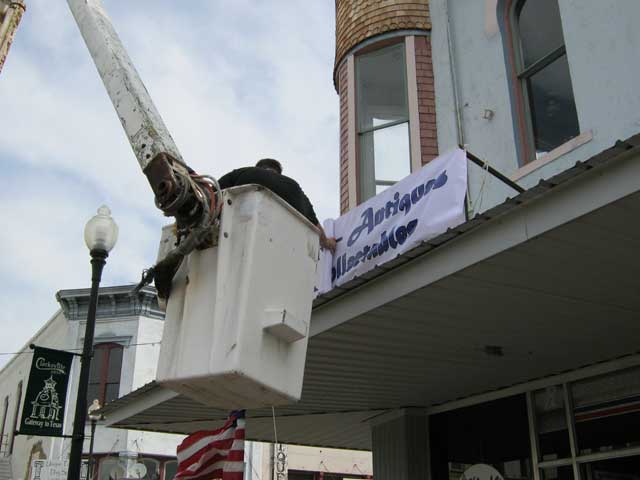 Rolling out the new banner for The Cupola 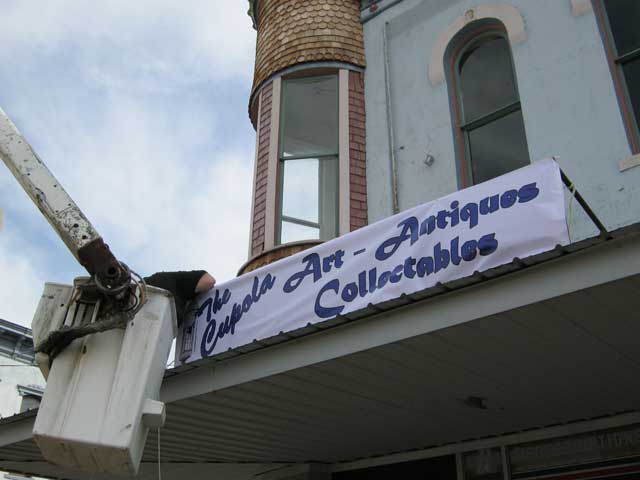 It was quite windy that day so I had to be careful about letting the 10 foot long canvas banner get away. Basically, I loosely tied it on, then worked my way back to the other end tightening everything up.

As luck would have it, I was tensioning the last knot/line, but I had to stretch a bit to reach it. Overreaching when elevated is not a good idea, especially when you have the tools to avoid doing so.

So I grabbed the bucket controls and nudged myself into a better position by swinging the bottom boom “over the top” just a little more (the folding booms are an art in themselves to get yourself positioned, though once you get used to it, it’s pretty easy).

That was a strange noise…

Now these old trucks make a lot of strange noises, but I wasn’t even sure where this one came from. A quick check to make triple sure I hadn’t hit anything with the boom or bucket (I hadn’t, I’m pretty careful), a visual look over the truck (nope, not on fire), and I just had to shrug and get back to work.

I finished my knot and swung the boom around to begin the descent onto the truck.

When I went to swing the bottom boom back “over the top” is when I found out what the noise was. Hydraulic oil shot out the hinge between the booms, which at that moment, was pointed straight up in the air.

Sigh. Blew a hose. That’s going to be a pain to fix.

These cylinders are equipped with “pressure relief” type valves at each end of the cylinder. The result is that they won’t “bleed down”. You have to use hydraulic pressure on the other side to force the “down” side to vent. This does a couple things…it makes general control much smoother, and it keeps booms from falling if you blow a hose. A very good thing.

In this case, it was on the “up” side and I could force the boom down gracefully (due to the pressure relief valve), and the only oil to leak was from what should return to the tank out of the compressing cylinder.

Now I’ve got to get the hose out, and get a new one made. Probably ought to replace a couple others in there as well. I expect this one blew due to wear and sun exposure right at the bend in the boom and there are probably others that should be replaced.

It’s probably a 40 foot long hose though (sigh). I’ll take pics on the operation to get that sucker out of there.

And knowing me, I’ll probably take this excuse to tune up/repair anything else I find along the way that needs it (like painting the booms…and the bed…and ??)

Anyway, got the sign hung and parked the truck, to await some time to get out the big wrenches. 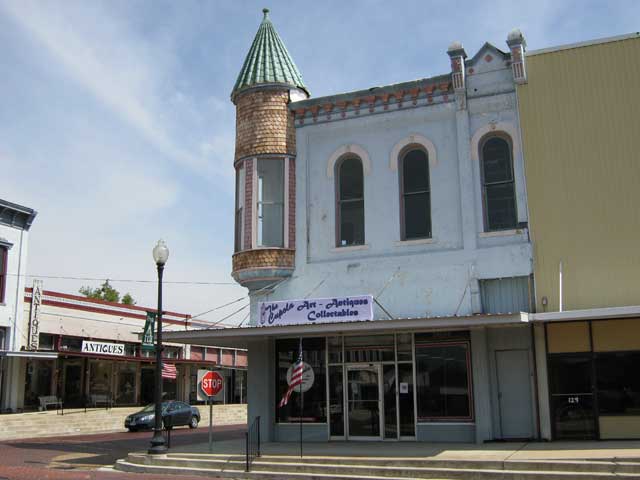 At least I got the sign hung before the Fargle-snorker broke.

Always something to fix.