And thus the Lord did mightily smite…our pecan tree apparently.

We had some unexplained stuff at the Clarksville house last weekend…

A tripped circuit breaker on the old wiring…the old knob and tube wiring that remains is on one 15 amp circuit in the new breaker box. It just provides some lights in parts of the house I haven’t wired yet.

It shouldn’t have been tripped.

Every light on that circuit together only adds up to about 240 watts…and the little fridge that is also on that circuit only pulls about 60 watts…perhaps double that for an instant when starting.

So…if everything was on at once…we’re talking 2 amps here. That leaves a good 13amps of steady load to go before trip-age AND all the lights were off. The spec on a 15 amp breaker says a transient load (under 100ms) could reach 30 amps before trip-age.

It WAS hot all week…and I mean TEXAS hot…with temps reaching 108 some days and not dropping below 86 at night.

Buildings heat up then…and can’t cool off at night. That’s when the heat warnings are out.

I thought maybe the little fridge had trouble starting or something and tripped it. Since it started right away on reset of the breaker and was running cheerily along (with no hint of straining) I wasn’t happy with that explanation, but had no other so it would have to do for the moment.

I visually checked out the old circuit though. Everything was fine.

Later in the weekend I found 4 CFL’s that wouldn’t come on. Strange. They weren’t very old and are supposed to last 10,000 hours…ah well. replaced them.

Something happened, I just don’t know what. Perhaps a voltage spike.

Stuff on the new system was okay though, including the air-conditioner.

After we left Sunday, our friend Larry called. Babe, our neighbor across the street discovered that our pecan tree had been hit by lightning. It blew bark clear across the street and into his yard. He says it jumped into the chain-link fence. They heard the strike last Tuesday I think, said it sounded like a bomb went off in the neighborhood, but didn’t know exactly where until he saw the tree.

I saw none of this and I walked by the tree once in the daylight while turning the water off to leave (it was night when I turned the water on). I guess I wasn’t looking up!

Some of that luck we made for ourselves though. Pulling the bad splices, connections, and other screwed up wiring out, and attaching the old circuit to the new service system probably saved our bacon. No weak splices (on top of flammable wall paper), proper grounds on the service and boxes, solid connections etc…

“Zork” says the lightning.
“Pop” goes the breaker. That’s that. End of problem.

The old stuff probably would have lit the house on fire in about 6 different places I can think of off-hand. I tore out stuff that had been working for 40 years because I knew it couldn’t handle anything out of the ordinary.

I’m very glad I did.

I hope the tree will survive…it has LOADS of pecans on it, they are very tasty, and it’s a durn big tree…something around 50 or 60 feet tall. I’d hate to have to cut that sucker down!

Anyway, on to the pictures! I especially like the ones that show the spot welds on the chain-link fence! 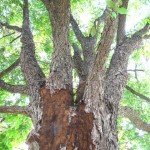 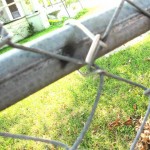 Parts of the fence were welded together 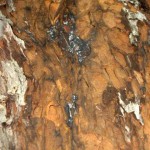 Lightning charred the tree and split the bark. 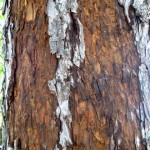 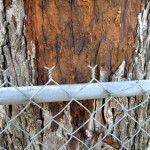 Lightining traveled from the tree to the fence 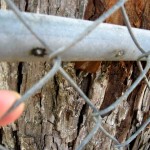 A close up of the welded spots 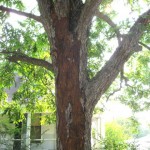 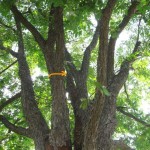 Traveled down this branch. 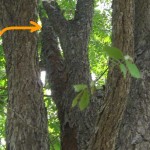 Came down this branch.

Author. Adventurer. Electrician.
View all posts by Daniel Meyer →
This entry was posted in Electrical, Yard. Bookmark the permalink.