Why they fall down *slowly*…

Yet more electrical work. Not much to show…as in “interesting pictures”. Basically I’ve been crawling through attics trailing yellow wire all behind me like some sort of giant mutant spider.

*shudder* On second thought…strike that mental image…I do NOT want to know what orifice that three-stranded copper, PVC sheathed “web” comes out of.

There’s more than a thousand feet of wire in this house now. Scary, since I’m only about 1/4 of the way done. (thinks about the upstairs)…If that.

Anyway, I thought I’d show a minor detail of construction that illustrates why these houses last so long. I won’t say they don’t fall down…we all know that anything man builds starts falling down before he’s even done with it…but these houses fall down *very* slowly.

Did they have some magical construction secrets long lost to the ages? Did the Egyptians come help after they finished the pyramids?

Nah. They had a wonderful lack of finesse and modern design standards.

Say that they wanted to hold up a porch? Did they do an environmental impact study, load calculation, soil strata study, computer simulation, hire 4 city engineers, commission an architect, call a couple building inspectors, and rent a small dog and two tennis balls from the orient?

Nope. What they did is look “over there”, point at a big honkin’ chunk of wood, and say, “That looks like it’ll hold. Use 4 of ’em.” Then they added a couple more just for symmetry or visual interest.

So. What was I talking about again?

Oh, yeah. Wiring and why these houses fall down very slowly.

It’s like this. I had to cut a 4″ hole in the side of my house so I could install the wiring box for the porch light. *One* of the porch lights anyway. There seem to be rather a lot of them.

There were two tell-tale holes in the spot I selected where, once-upon-a-time, a knob and tube light (long gone) had lived.

I got out my trusty 4″ hole saw and started cutting. And cut. And cut. And kept cutting. And some more. And deeper still. I’m out of “hole drilling” mode and into “core sample” territory by now. The torque on the *big-honkin’-drill* is starting to cause me to strain a bit. The city is bringing auxiliary power plants on-line to make up for the load on the grid from the big yellow Dewalt drill.

Man. Won’t they be surprised when I run a wire through Barcelo for my porch-light…

Oooo! Finally! A hole! The standard kind…I think…a bit deeper than I expected but no wormhole or speed-of-light calculations involved.

The exterior siding is cypress…ONE inch thick cypress! Even where it’s thinnest (it has a profile) it is nearly 3/4″ thick.

Under that is 1×12″ tongue-and-grove (western red cedar) mounted diagonally. Another full 1″ of wood. 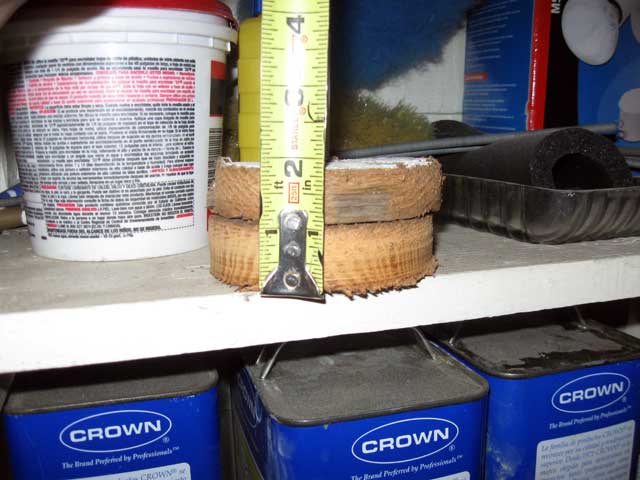 The plug...TWO inches thick! Just for the sheathing!

Inside the house is another 1″ thick layer of the 1×12″ western red cedar (laid horizontally this time) under whatever wall covering they selected (typically wallpaper).

So, that’s three solid inches of wood and a 4″ wall cavity between the inside and the outside.

I find it very amusing to contrast this to the sheathing on my modern house. Well, it has a brick veneer…but the brick is attached to the wall to hold the brick up. Sigh. Where it’s not brick it has 1/4″ thick wafer-ee-bordy stuff. Oh, and some plastic. I’ve already had to replace much of it. Weeee!

I wonder which one will fall down first?

Author. Adventurer. Electrician.
View all posts by Daniel Meyer →
This entry was posted in Carpentry/Structure, Electrical, Miscellaneous. Bookmark the permalink.

2 Responses to Why they fall down *slowly*…