Venting Dihydrogen monoxide to the atmosphere…

In an ideal world, a gentle chime would sound and then Majel Barrett’s voice would say something like, “Warning, you are venting Dihydrogen monoxide outside the pressurised distrubution system. Current consumption of energy stores has risen by 40,000 btu’s per hour. Normal utility funding levels will be exceeded in 2.4 hours.”

All this actually means is that a hot water line broke…but yeah, I’m a geek.

Actually, in an ideal world I would have had the problem corrected before it started…but what can I say. The house got ahead of me.

We had a very minor water leak in the old plumbing since we got the house. The meter would barely tick over. I didn’t worry too much about it since I would be completely replacing the plumbing.

Shortly, I figured out it was on the hot water side, and that was even better, as we could shut off the hot water at the water heater and not leak anything except when we needed it on. The water is off to the house when we are not there.

Repair it? Yeah, I should have…but I had looked under the house and could find no leak. Wherever it was (perhaps underground), it was small enough that I could not see or hear it.

Not to worry…it was going to be replaced. It was not worth an extended effort at repairing something I was replacing shortly anyway.

The house got ahead of me. Sigh. The line let go. We drained the water heater of hot water in 10 minutes. I still could not hear the leak. We shut off the hot water plumbing.

We were still weeks away from being on the new water heater, and those cold baths are really COLD…cold as in…me screaming like a cheerleader on helium…cold as in…me telling the wife to put on a bra or “you’ll put somebody’s eye out with those things.”

With winter coming on it was only going to get worse…so I decided to have a look. A quick repair or a capping off a bad section could regain us the use of SOME of the hot water for the couple weeks we still need it.

My Dad came out for some much appreciated help on the house this weekend, so I headed under the house and had him crack the valve a few times…this way I could hear the spurt.

Yep, under the kitchen. Underground. 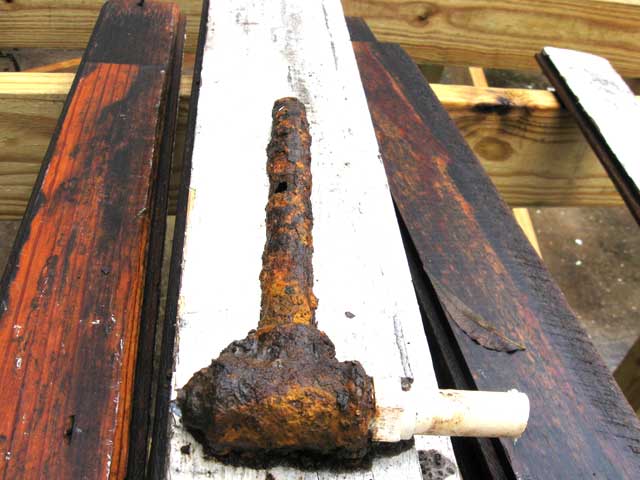 The pic above is the pipe I pulled out. New(er) CPVC coming from the water heater to the old iron headed for the kitchen. Can y’all spot the vent? 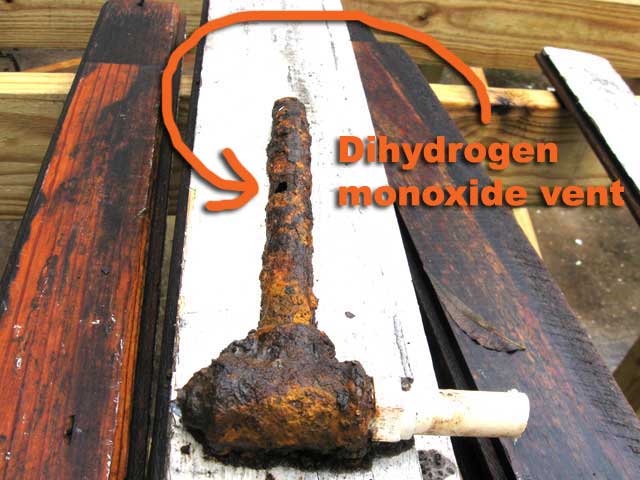 I cut the pvc and the rest just broke off. Done for. We capped the line and now have hot water in the bathroom…

That will do until we are on the new system…which, by the way, we started installing!

The new tankless hot water heater is in, simply waiting gas and water lines, and we installed the main manifold this weekend. Should go pretty fast now.

The new PEX manifold. The water heater is externally mounted in a flush mount cabinet…you can see the back of it…the white cabinet in the lower left of this picture. 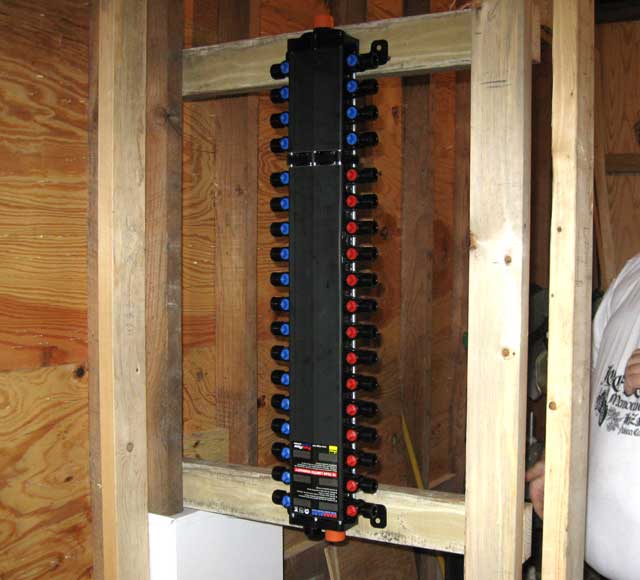 Not shown (of course, since I haven’t built it yet) is all the cabinetry that surrounds this area.

And for the non-geeks out there:

More later. Nearly three inches of rain Saturday night and Sunday slowed us down a bit…but by golly…We have DOORS!

One Response to Venting Dihydrogen monoxide to the atmosphere…