My friends just felt a chill…

Around 3pm yesterday, I’d expect that my friends…ya know…the ones that owe me favors or just seem to always be there to help…all looked up at the same time, shivered, and said something along the lines of, “I’ve felt a great disturbance in the force…”

See, I’ve a project in mind…and I expect I’ll need a little help. I spent time yesterday getting some of the tools ready for the work…inspecting, lubing, and cleaning them. 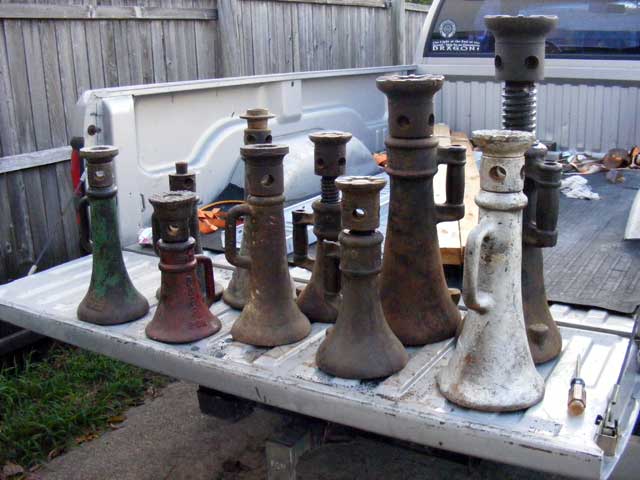 Yep. Those are screw jacks…sometimes known as “railroad jacks” or “house jacks”. Folks that know what they are, or have used them, know that when they come out, that somewhere, sometime, there is a heap of work to be done.

The capacity is based on the screw size. The smallest is 1-1/4″, which is good for about 15 tons. The 2″ are good for 20 tons, and the big ones in the back are 2-1/2″ and good for over 30 tons. The jacks themselves weigh anywhere from 30 pounds for the smallest to 80 pounds or so for each of the two biggest ones. Altogether they weigh something near 400 pounds.

There’s enough jacks there to pick up close to 400,000 pounds…nearly half-a-million pounds.