Parts of this house HAD been stripped to the lath and re-decked in the 1990’s…principally the south side. One of the decisions we made was to spend extra and remove that decking and replace it as well.

We did this for three reasons.

1) Our new decking is TechShield decking. It incorporates an IR barrier on the underside. This keeps radiant/IR heat out of the house and can reduce your air-conditioning needs by nearly 20%. Here in Texas…that is significant. Replacing the south side decking with Techshield seemed to be important to me as the south side of the house gets the most sun.
2) The proper way to redeck this roof is to ALSO strip the lath. This had not been done on that redo.
3) My instincts told me that old decking had NOT been installed correctly. I’m not a pro roofer, but I could look up at the 1990’s shingling job and see that the courses were not even or kept in line. This is the mark of an amateur and gave me no reason to believe they had taken any care in installing the decking. Doesn’t do me much good to install a premium shingle that’s good for high wind if the decking it’s nailed to flies off in a light Texas breeze.

Truthfully, in the back of our minds we wondered if we were wasting time and effort…and more importantly…money.

As usual, my instincts were solid. As soon as they started peeling the old decking off our decision was wholeheartedly vindicated. 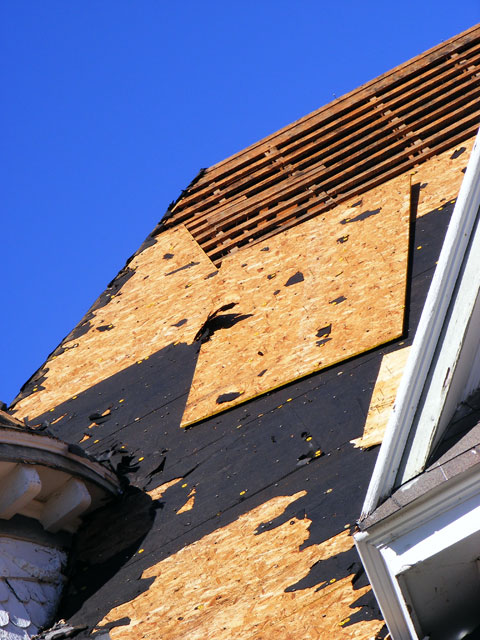 The old decking coming off in sheets!

The old decking simply wasn’t attached well. There were about a third as many nails as there should of been and the few that actually hit anything were just into the lath…which is not very solid or thick lumber and was only intended to nail cedar shake to.

Had it been attached correctly, they would have had to rip the old decking to shreds to remove it. Instead, they were simply lifting entire sheets up and off, without even the nails pulling through. A good wind storm catching it just right would have destroyed this. 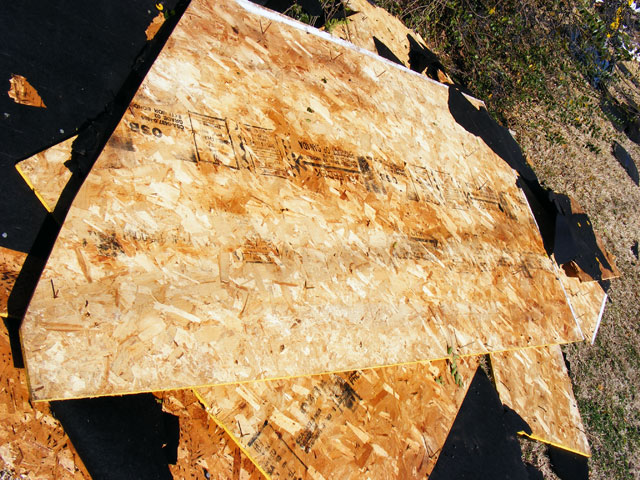 The nails didn’t even pull through!

On this job they will remove the lath to put down the new decking, and it will be nailed to the VERY substantial rafters. 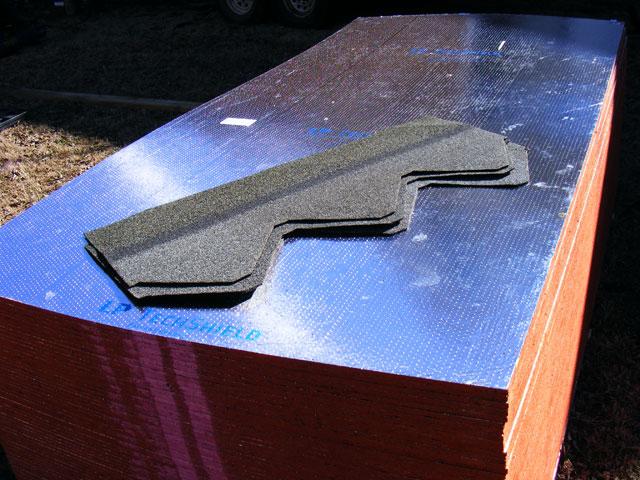 The new shingle and decking.

Once the truck was unloaded, a bunch of the guys started decking the north side of the house, while the rest kept right on stripping. It was a dance…almost…there was art, skill, and physical prowess…and a whole lot more noise.

This was about the time the wife (safely in another city away from the destruction) called and asked what I was doing.

“Watching about a dozen strippers dancing around,” I replied in a stunned voice, “Truly an amazing sight!”

That may not have been a properly worded answer.

We’ve been together a while now. She just laughed and responded with, “Well, be sure and tip them properly!” 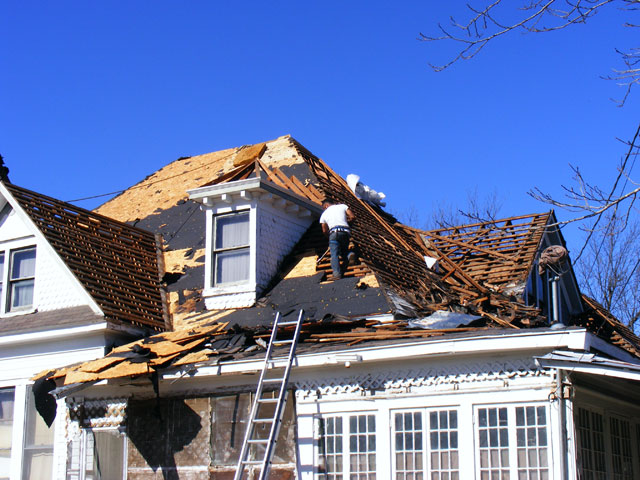 Stripping the south side

I found myself fascinated by what was fast becoming a skeleton of our house…and the pace that it occurred was simultaneously encouraging and utterly terrifying. 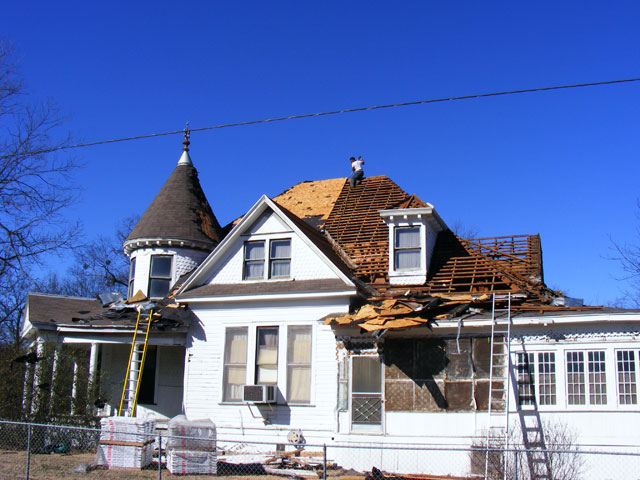 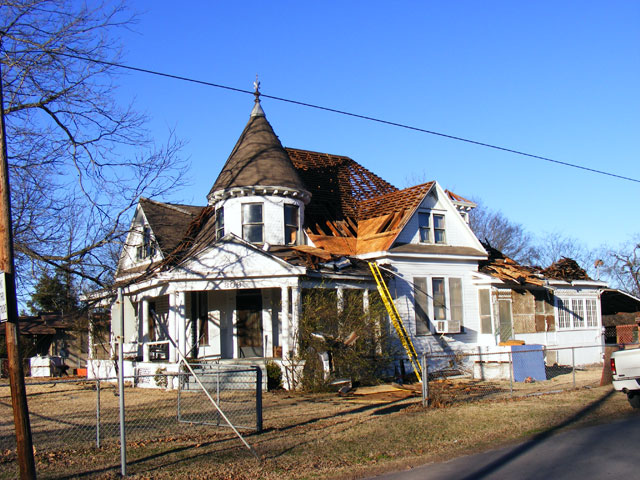 Oh good lord I hope they can put this back together!

Some of the guys had taken off to the landfill with the 1st truck and trailer full of debris. Our city transfer station is only open a couple days of the week…and it turns out it doesn’t take roofing materials anyway…so they had to truck the stuff to one of several cities that would accept the load (the cities charge substantial fees for this). 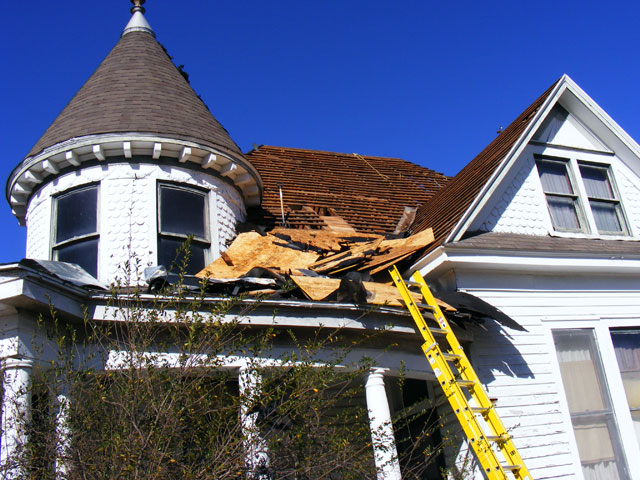 All done but the dumping 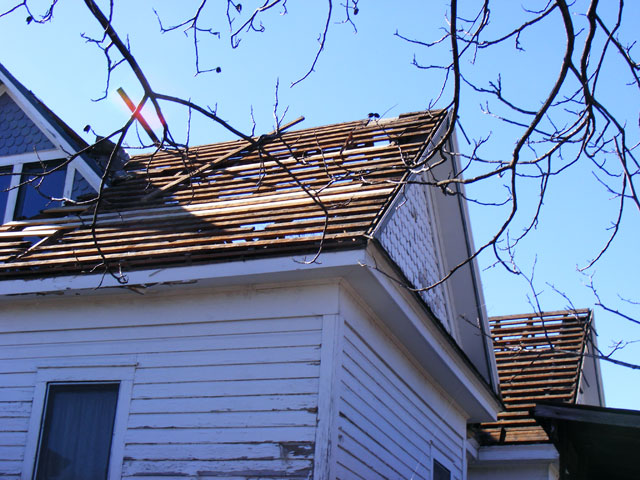 Mesmerized by the destruction (train-wreck style) I didn’t really notice the decking work until sunset when they started wrapping up for the day. I walked around to look at the north side and saw amazing progress. 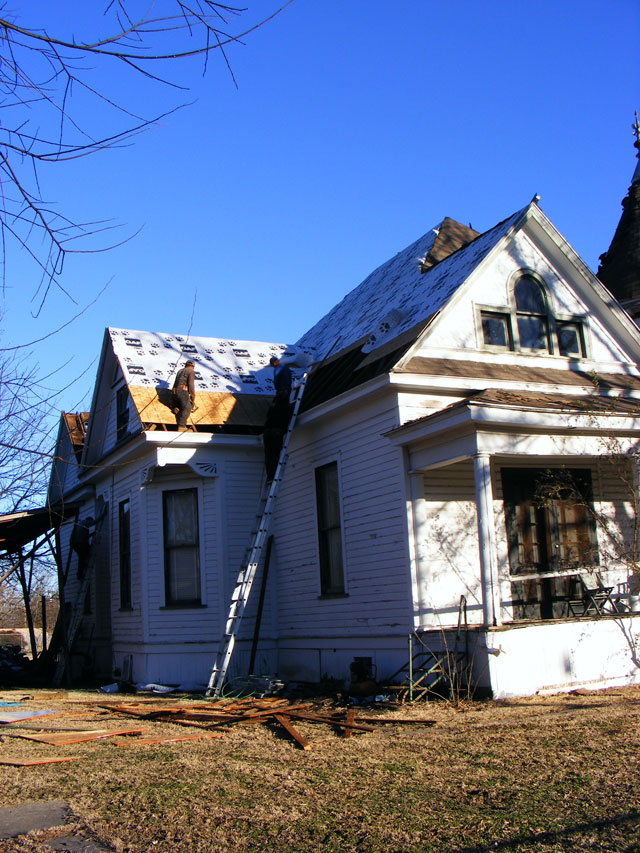 By sunset the north side was decked!

These boys worked till there was just enough light to put their tools away and then vanished into the night. They had traveled far to do this job and were staying in Paris, Texas…some 30 miles away. Makes for a long day!

In the sudden quiet I grabbed some random stuff out of the freezer and made something unremarkable for dinner. I was somewhat stunned really…I hadn’t expected the project to generate so much stress on my part. I’m usually quite laid-back about taking stuff apart…and usually fully capable of putting it back together. This job? Not so much.

Ah well. Dinner. And then I had homework to do.