Door repair on the square

Worked on the rear (side) door of our building on the square this weekend…this is the door that leads directly to the staircase that goes all the way upstairs.

It may be original…hard to tell…but unlike the other exterior doors on this building, it is the original size for the opening.

It had several problems to address. Peeling paint, rot on the bottom end-grains, and loose/rotted trim that holds in the glass. The lockset also needed substantial work…over the years it had become a two-man job just to open this door.

The door has bars on it (added later). They are in good condition but have some surface rust. I’ll prime and paint them the same color as the door.

I had to remove the bars for this project though.

After the bars were off, I removed and reset the glass with new trim and glazing. The condition of the trim was so poor I removed it all with basically just my fingers…One good slam and the glass would have exited the door. The glass is double laminated and is quite heavy. Swearing could be heard echoing about the square as I struggled to reset the glass without breaking it…or myself…

The bottom end-grains were rotten because the door basically touches a concrete threshold…a bump in the concrete entryway…and the grain wicks moisture up into the door. There is also no sweep etc to help seal the water out. I figure it’s been working on rotting for 50-60 years…fortunately it’s sappy yellow pine and is quite slow about it.

No need to replace the entire door just for a bit of rot though. Solve the moisture problem, plug the rot, and we’ll go for another 100 years or so with regular maintenance. 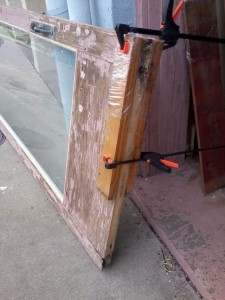 The plastic wrap is critical… 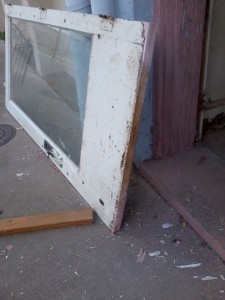 Bondo is your friend.

I used Bondo to fill the rotted areas. It is an Epoxy-based plastic filler. It won’t absorb water, hardens to workable in 20-30 minutes, is VERY shape-able (grater/file/sanding), and will last indefinitely. You must be careful, like with any wood repair product, to solve the problem that caused the rot originally, but if you do, the Bondo will be a permanent repair. It costs around $30/gallon as opposed to many times that price for dedicated Epoxy-based wood repair products.

I wrapped a couple pieces of scrap wood in plastic wrap so they didn’t end up permanently bonded to the door, clamped them on as a form, mixed up a fist sized amount of Bondo, and worked it thoroughly into the rot. 25 minutes later I removed the forms and shaped the result with a rough file and presto! Done. I then flipped the door and did the other side. Remounting this door is no small feat when you’re by yourself…

I’m sure anybody within 3 blocks of the square was looking around and exclaiming, “What the HELL is THAT?”

Primer and paint next weekend.

Y’all take care…and FIX something, will ya?

Author. Adventurer. Electrician.
View all posts by Daniel Meyer →
This entry was posted in On the Square, The Cupola Building. Bookmark the permalink.

One Response to Door repair on the square