“Women and cats will do as they please, and men and dogs should relax and get used to the idea.”
– Robert A. Heinlein

Geronimo, the big orange cat, is meowing pitifully from somewhere in the Old Vic. It sounds frantic…and pathetic

I’d let him stew for a while…there’s really very little trouble the cats can get into here. Well, there’s little trouble once we plugged the durn cat-leak anyway. Besides, the ghosts like the cats, and Geronimo in particular.

Yeah, I’d let him stew…except the wife worries more than I do and flashes “the eyes” at me. She’s even cuter than the durn cat is.

Sigh. The things I do for pussy…ur…uh…cats. Pussy cats.

I go hunting and eventually end up upstairs. It takes a bit of time, as it’s a big damn house and he is not constantly crying. Finally I locate him.

Yep, he is, somehow, locked in a closet.

I open the door. We look at each other. He’s just sitting there in that uber-dignified cat way, tail wrapped around his front paws. For as pitiful as he sounded he seems remarkably calm.

He calmly blinks. Basically the cat version of, “What’s up dude?”

He just meows and makes “the eyes” at me.

“Dude, I am NOT carrying you. Out!” and I point toward the stairs.

He gives me an insulted look and the 19-pound package of muscle and grace leaps out of the closet (tawump), gallops across the hall (galump galump galump), zooms down the stairs (kathump kathump kathump), and races into the parlor (thud thud thud) to join the wife watching TV.

So, a close look in the closet reveals his secret. There’s a passage into the side attic upstairs (several actually), and there’s a hatch in the back of the closet to an attic over the porch, so obviously he navigated that connection.

Mystery solved. Cat safe. Pettin’s and purrin’s all around. All is right with the world.

A couple hours later the pitiful, frantic meowing starts up again. So do the wife’s “cute” eyes.

I step out in the downstairs hall, listen carefully. And yep, it’s coming from upstairs in the same general direction.

I yell, “Geronimo! You doofus! I am NOT rescuing you from the same damn closet again! Get your furry orange butt down here!” 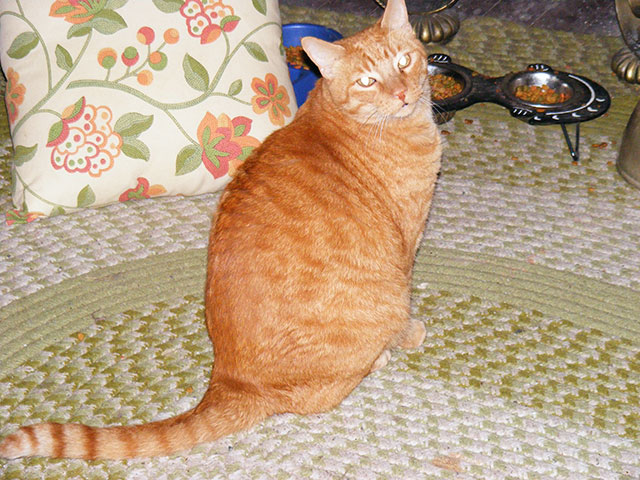