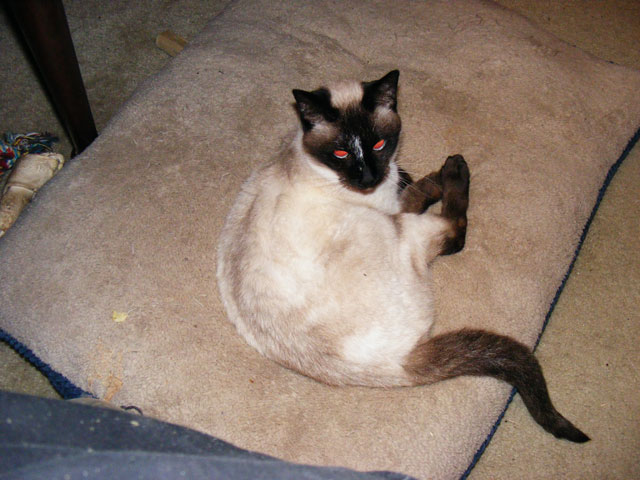 Hiccups so bad she almost levitates…

With the rains scheduled for Saturday night and Sunday morning, the crew left for home and promised to be back Monday (beautiful weather predicted!).

As predicted, it began raining around midnight and kept it up pretty steadily until late Sunday morning.

What a relief it was…to not have a bunch of buckets collecting water in the Old Vic. We were DRY!

All in all we got between 3/4″-1″ of rain…all on the outside of the house for a change!

We had Mom over for a leisurely breakfast (waffles, sausage, coffee, and strawberries) and chatted through the morning.

Around lunchtime the weather blew away and it turned into a “Chamber of Commerce” day. Gorgeous temperatures, sun, maybe a little breezy…but gorgeous.

A day off. I tried. I really did…but a project was calling my name.

Apparently I suck at days off.

There was a shed built on the north side of The Old Vic that was quite ramshackle, unstable, and frankly, just plain ugly. I’ve wanted it GONE since we bought the place. 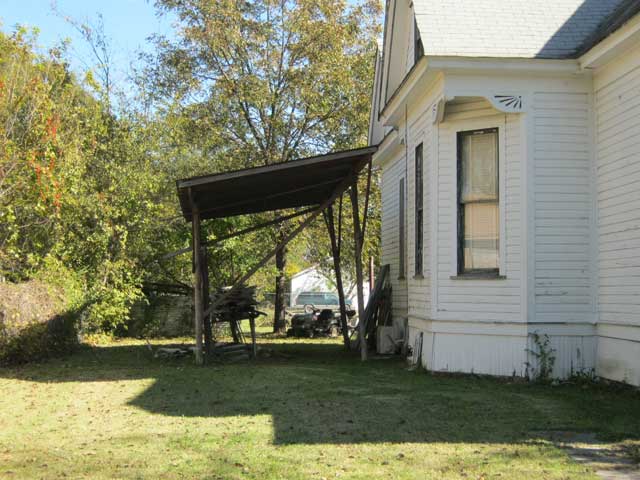 This thing…I want it gone!

Disassembling it was problematic though. The low side of it was 12 feet off the ground, and at least two of the poles had rotted off at the ground and the thing was quite unstable.

It HAD to be taken apart…it was too close to the house on one side and the fence on the other to risk pulling it over…and the bottom line is that it would take itself down soon enough and damage something in the process.

Just pushing on one of the poles wobbled the entire thing…by a foot or more at the top! 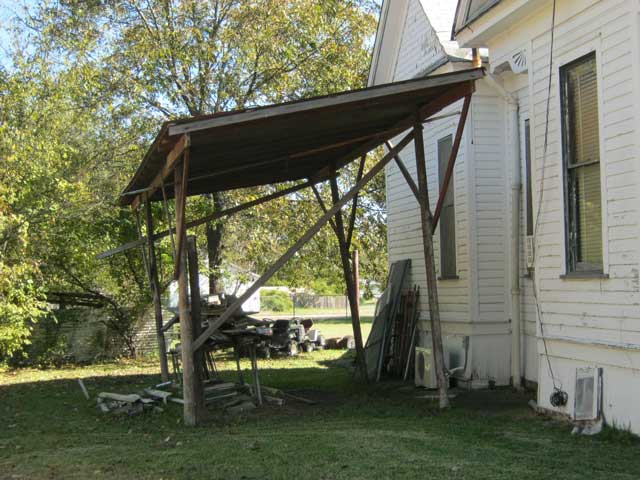 A closer view…to capture the UGLY.

No other way to do it…but to climb on top and pull the sheet metal, then take the joists down one at a time…and all the while…to pray that I don’t pull that ONE nail that’s keeping the entire thing standing.

THAT…my friends…was a hell of a ride. 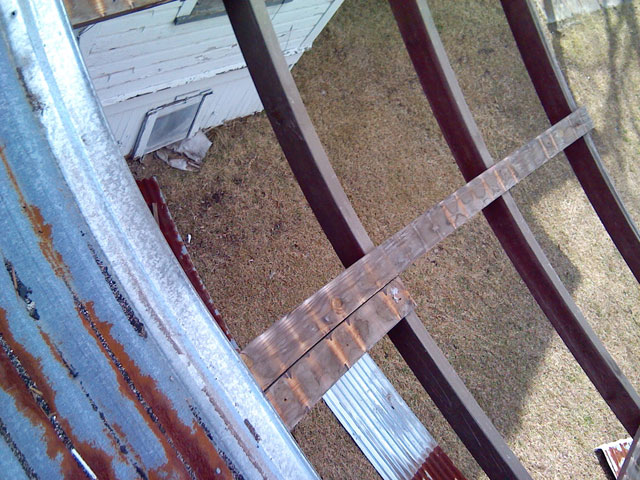 The view from on top of the shed

The nails that hold sheet metal on are serrated things that don’t pull easily…I had to hook them with a crowbar (a Stanley Wonderbar), but then I could not “ease” them out…the serrations hold quite well and an easy pull simply would pull part of the head off. Rather, I had to hook and jerk them. BANG! Every nail…hundreds of them…each pull wobbling the entire shed and making for quite the amusement park ride experience. 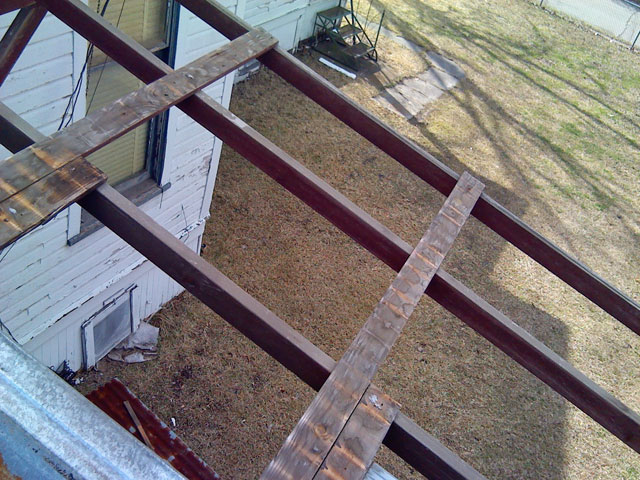 I started pulling on the west end…

The more sheet metal I pulled, the less stable the structure became…as the metal was at least holding the top structure “in square”. 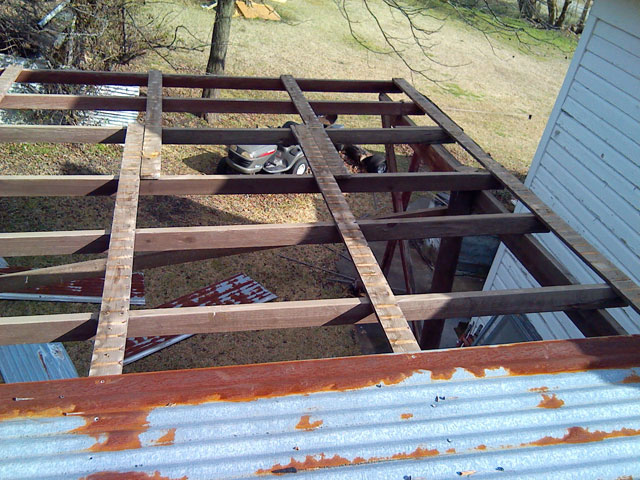 And then switched to the east end, leaving me sitting in the middle. Not many left…

Once the tin was removed…I would put the ladder up against a joist about two in or so…and pull the whatever ones I could reach. 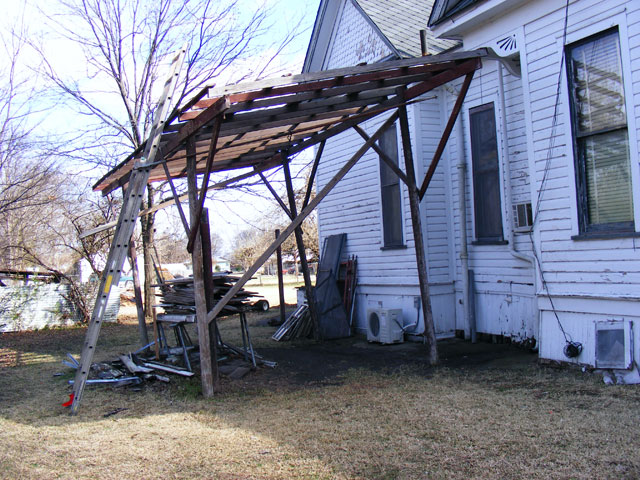 The structure got less stable as I moved along…but I nailed a few of the old joists to the poles as temporary bracing so I could drop them in a more controlled manner. 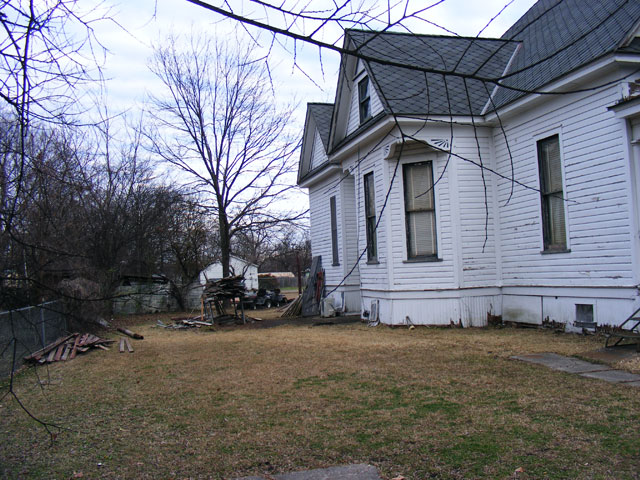 The north shed is GONE!

A few hours work and presto! It’s gone! And nobody died! (AND I can use the house again!) Woot!

None of the wood was salvageable…and the structure was considerably LESS safe than it appeared…simply because of insect damage.

Ya’ll know what Carpenter Bees are? We also call them Cedar Bees here…

They drill into wood and then turn and follow the grain…hollowing out to make a nest.

They do significant damage…as they are fairly large and the holes they drill are about 1/2″ in diameter.

Every joist in the shed had damage. 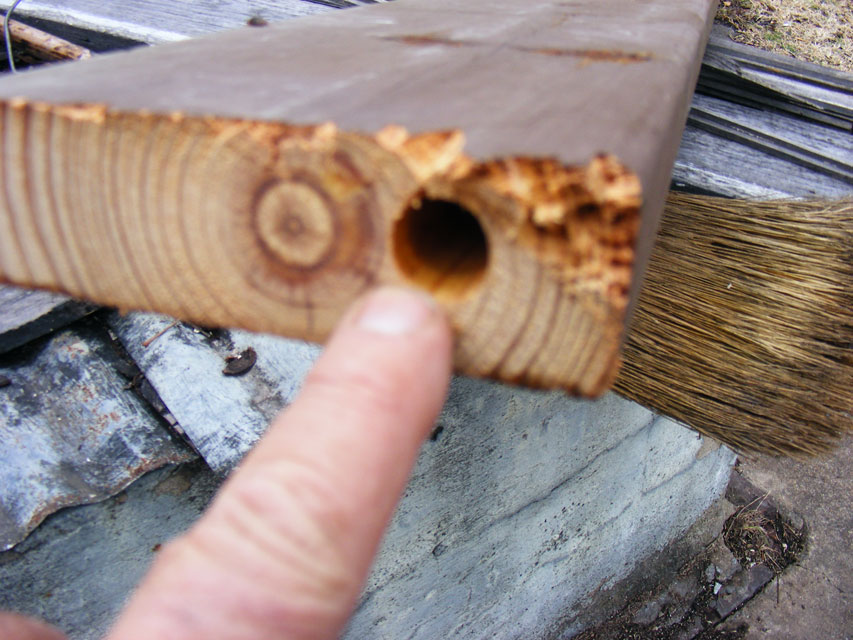 Not even 20% of the joists strength remained. 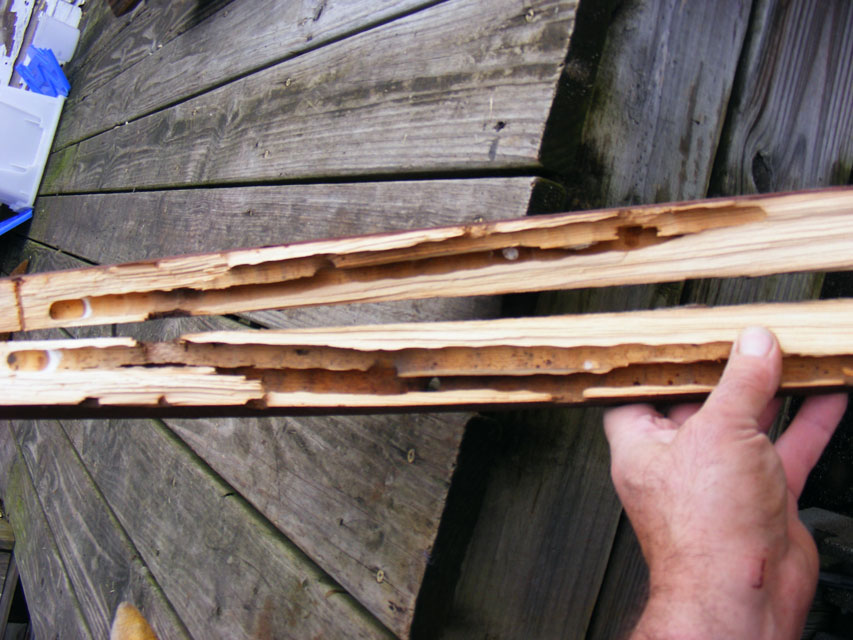 Smacked the board with a hammer and it shattered…note the damage.

A couple more hours of cleanup…and it was time for a good night’s…rest…yeah. Rest. That’s the ticket.