Sooo…it’s Friday at the end of January…and I’m sitting here in The Old Vic, waiting on the cable guy. Once again our connection to the outside world has gone “intermittent”…and it seems to offend the cable company that I expect that for the rates I’m paying…the service needs to work when I need it.

I can’t leave…the cable company has scheduled my appointment for…I kid you not, “today”.

With nowhere to go…spotty internet service, and fried TV signal, I’m stuck twiddling my thumbs. It’s at this uncharacteristically idle moment that the full weight of what’s coming NEXT week hits me…see, the roofers are coming…and I’m terrified.

I’ve done roofs…rather a few of them actually…enough that I know (mostly) what I’m doing and just how much work it is. It was with that knowledge and experience in mind that I knew two things about this house the moment we bought her:
1) She was going to need a new roof someday.
2) I wasn’t going to be doing it.

The Old Vic, you see…is big. BIG big. The roof is steep, faceted, and complex. Various parts of the roof had been redone over the years, but there were some obvious condition issues. The eastern exposure for instance, was an absolute mess of various layers.

Thankfully, the roof did not leak when we purchased the house and we expected we could get 5 years or so out of the worst parts of it before repair or replacement was needed.

That number turned out to be just about right. 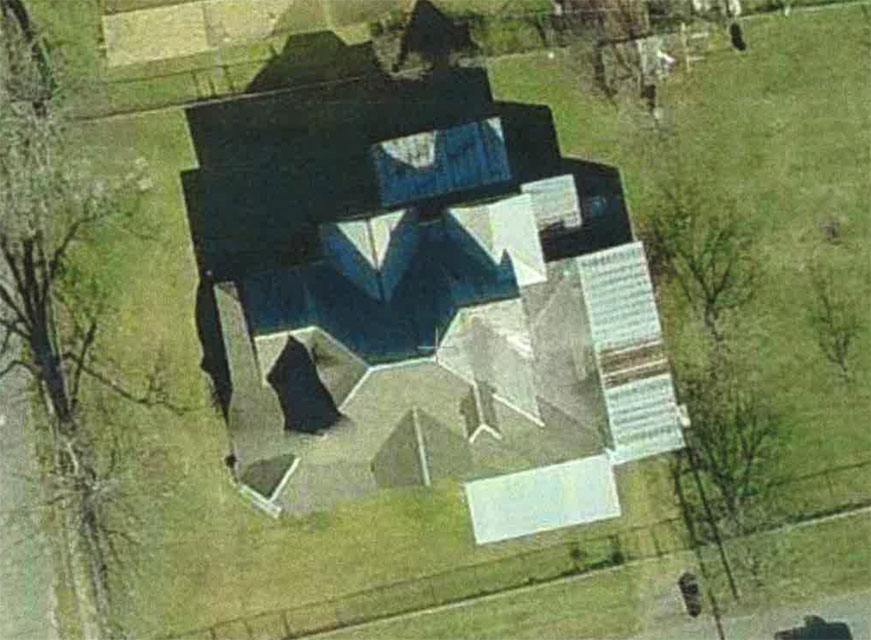 The NSA’s view of The Old Vic

When we completed the purchase we diligently set up a budget carefully putting money away for the various aspects of the remodel project and specifically, for a new roof 5 years or so out.

A week later the economic crisis caught up with me and I took significant a pay cut. The universe, of course, showed its perverse sense of humor…as that pay cut was almost to the penny, our entire remodel budget.

“Yikes!” we cried. But then we did what we always do in a crisis…we coped, figured out what was important, made a few guesses, pinned a few hopes, and then rearranged, re-prioritized, and carried on.

One of the hopes was that, perhaps with some minor repairs, we could get a few more years out of the worst parts of the roof.

Severe weather and hail is not unusual in Texas. It happens pretty regularly. We look for damage, shrug, and go on about our business. In April 2011, large hail pounded our town. That weekend I looked at the roof, didn’t see anything remarkable, and when it rained a couple days later and nothing leaked, I promptly forgot about it. It turns out that as far as hail damaged roofs go, apparently I don’t know what to look for. That turns out to be important later. 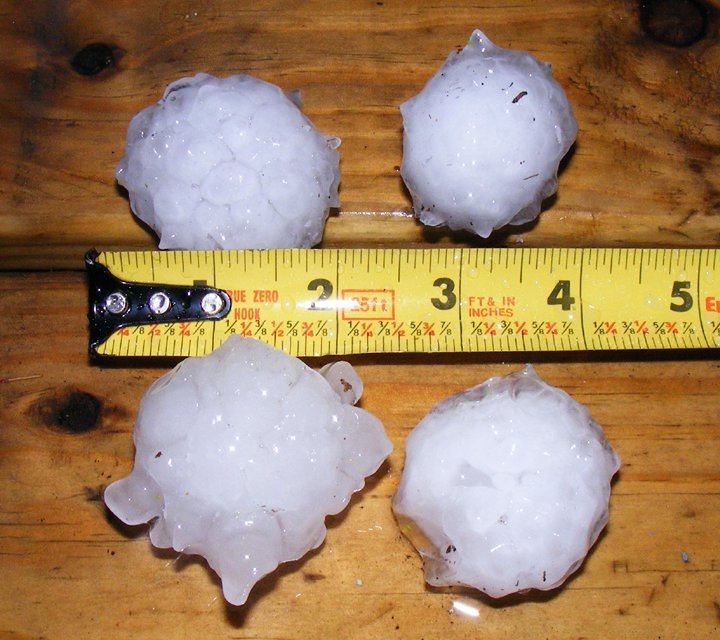 Fast forward to August 2014. Since we bought The Old Vic we’ve endured lots of storms, more hail, wind, drought, and heavy rain with nothing but a small leak that I easily repaired. Slightly more than the 5 years we originally hoped to get out of the roof have passed. I’m uneasy about how much longer that eastern exposure will hold out…and then we get an August rain.

An August rain…or…let’s call that a TEXAS August rain. Eight inches of rain in under 24 hours. A regular deluge.

We had waterfalls in the house. The eastern exposure was lost…and there was something wrong behind the tower on the other end of the house. We caught what water we could and cleaned up/dried out the rest.

A quick climb and attempted repair on the eastern exposure and I knew…a new roof was now inevitable. Even tar couldn’t help…the shingles on that exposure were cracking apart and adding tar just pulled more of them to pieces. 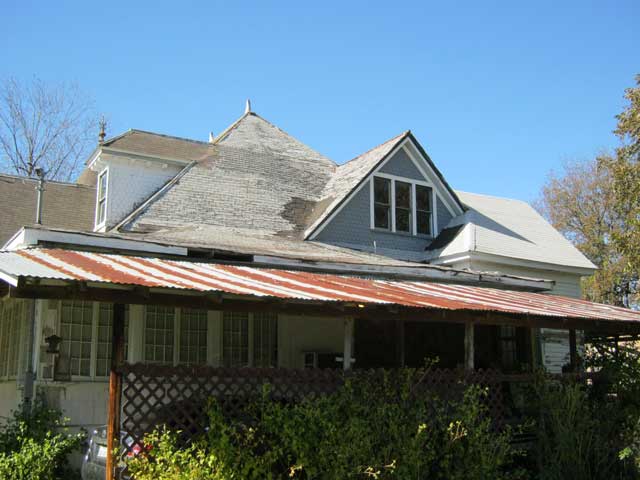 It was time. We wanted to do this right…with a high-end shingle, complete redecking, addressing some structural issues, and adding ventilation.

I pulled together a list of roofers from the surrounding area via recommendations and ads and started calling.

There were 16 on the first list:
-Four didn’t return my calls.
-Eight made appointments and then didn’t show. Frankly, I think they drove by and said, “Oh HELL no!” and kept right on going.
-Four kept their appointments…of those:
—One just wanted to “Slap a layer of three-tab over it.”
—Three returned quotes. Only two wanted to talk about special attention and “Victorian Style” shingles. Only one of those was serious about it (the others kept trying to talk me out of it).

I had a couple more recommendations that I hadn’t called yet due to the distances involved even though they served our area, but I still did not have a bid I was happy with. I called.

The last appointment was Service First Roofing and Construction out of Lewisville, Texas.

I happened to be outside when they arrived. Brian McCarty popped out of his truck, introduced himself, smiled, and said, “I’ve got the perfect shingle for this house.”

Guess who got the job?

It wasn’t all that easy for Brian of course…I did my homework…they’ve been around a while with nary a complaint…and his quote came in the range of what I was expecting.

Back to the Hail

The next thing Brian said was basically, “You’ve got MAJOR hail damage on this roof. Have you filed an insurance claim yet?”

Parts of the roof were redone (probably in the 1990’s) and were in pretty good condition when we bought the house. Once Brian showed me what to look for, it was obvious the roof had been storm damaged.

I have insurance. My roof is covered for hail/wind damage. Why shouldn’t they cover at least a part of it?

“Not I!” said the pussycat

“Well, the roof is totaled. Hail damage. No question at all. BUT…it wasn’t this last storm…or the one before that…or that other one…or the big one before that…but rather…it had to be THIS one back in 2011 when you didn’t have insurance.

Ah…but I did have insurance back in 2011. The company merged or spun off or something and that segment pulled out of the area. My policy shifted to the current company at that time.

I hung up the phone and called the previous company. They claimed of course that it must have been a more recent storm, but because I filed the claim, they would send an adjuster.

Turns out they use the same independent adjuster so really, NOW nobody could argue about what storm it was. I was covered!

Sort of. They still had a couple tricks up their sleeves.

First…they had slipped a little thing called ACV coverage into my policy. What this means is that you are not covered for replacement value…rather, you’re covered for whatever they declare the depreciated value of the roof to be. In my case, it was a mere fraction of the cost of the job.

They say ACV stands for Actual Cash Value…but what it really translates to is, “Ha sucka! You just keep paying all those premiums like a good little consumer. We ain’t paying! BWAHAHAHAHAHA!”

Ah well. Some coverage is better than none, right?

One more trick…BOTH insurance companies said if I went ahead with the replacement before they check was cut I would likely forfeit any settlement. This sucks…the adjuster has seen it. My roof is totaled…and still I cant start? Ah well. At least it’s summer and I’m not taking too much damage…but then…even after they settled, my previous insurance holder would not issue the check…and summer was ending fast.

In desperation I called them, “I’m taking interior damage in every storm!”
“Well sir…” she said in a tone that totally negated any respect inherent in the term “sir”, “THAT would be the responsibility of your CURRENT insurance company.

I hung up without comment and called my current insurance company. When I told THEM what the other company said they said they’d take care of it. That did the trick. I had a check in my mailbox in 48 hours!

It was an itty-bitty check…a small fraction of what was needed…but at least I was cleared to proceed.

And now the weather

We needed a 5 day weather window to get this job started. Of course, once the checks were cut, contracts were signed, and everybody was ready, we never seemed to have a week without solid rain.

Let’s get this party started!

Finally! The weather pattern shifted! Days of dry temperate weather were predicted! Everything was ready to go!

So…Friday before the “go for it” Monday. Waiting for the cable guy. Idle hands. Nothing to do but ponder. Queue the terrification level.

I had thought it was going to be easy to sit back and watch somebody else do the work. I’ve been in construction long enough to do so. But there was a key difference here; this was our house. It’s a HUGE, complex job.

I was utterly terrified.