Yeah, I know, I’m working on brakes a lot lately…but they ARE kind of important and besides, I am the stubborn sort. I WILL FIX THESE DAMN BRAKES…or perhaps I will end the world trying…one or the other…which one depends on my mood at the time I suppose.

So, when last we paused for breath, I was needing a new vacuum-booster (otherwise known as a Hydrovac brake booster or, the technical term, a fargle-snorker-brake-sucker-thingy). Seems the old one was letting air into the system AND leaking brake fluid into the vacuum side, which of course then gets sucked into the engine.

Those following along will be pleased to know that despite there being two VERY different parts available for the brake booster on the Left-handed Fargle-snorker, and the only way to tell was examining the old one, which of course was over a hundred miles away when I made the purchase…that I actually acquired the correct part!

Amazing! I’m not sure that’s ever happened before… 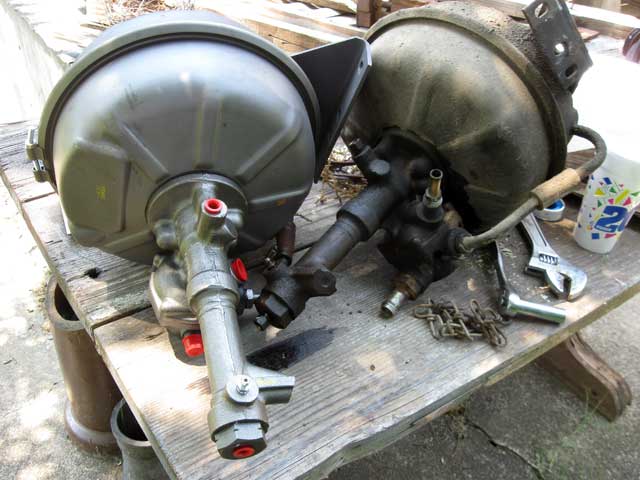 Hey look! I bought the right one!

Of course, it wasn’t just a BOLT IN replacement…alas, it just never works that way. If you look closely in that picture you will see the substitute bracket it was held on with.

It wasn’t “bolt in” because there weren’t any bolts! Seems the last time anybody worked on this thing they decided that the three 1/2″ bolts that hold this thing to the frame were just not suitable, so they tossed them away and replaced them with a piece of dog-chain. 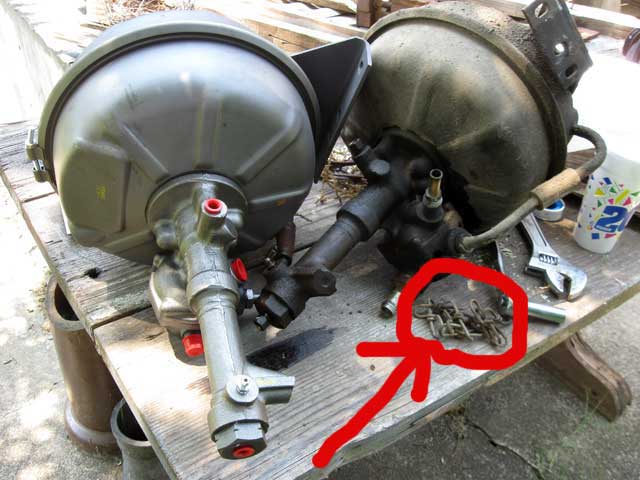 The incorrect bracket for the hydro-vac brake booster

So, between the brake, vent, and vacuum lines…and the piece of dog-chain…this thing was ALMOST attached to the truck!

I decided dog-chain is probably not the best bracket, and decided that bolting the thing back to the frame was probably best.

Of course the hardware and auto parts places had closed exactly 38 seconds before I realized I needed parts, and I was lacking a machine shop to turn some bolts out of the remains of the missing Huey UH-1 (long story, remind me to tell you about it sometime), I’ll have to hit it again later.

That’s okay…it’s friggen HOT out there now (with a 25 mph “breeze” like a blast furnace) and the bolts would melt anyway.

Not tomorrow though, father’s day and all that. Gonna make a dinner and figure out a present (Hmmm…Huey UH-1 perhaps?)

So yeah. One day soon. Brakes. Better yet, brakes that are actually bolted to the truck!