“Huh. Wondered where all that brake fluid was going…”
–Quoted by me when I started the Left-handed Fargle-snorker and she smoked the entire neighborhood in thick, white smoke.

Me and my friend Mike were finishing up the brakes on the Fargle-snorker today, but we had extreme difficulty bleeding them. Very frustrating…they are just hydraulic brakes and should, really, be no big deal to bleed. 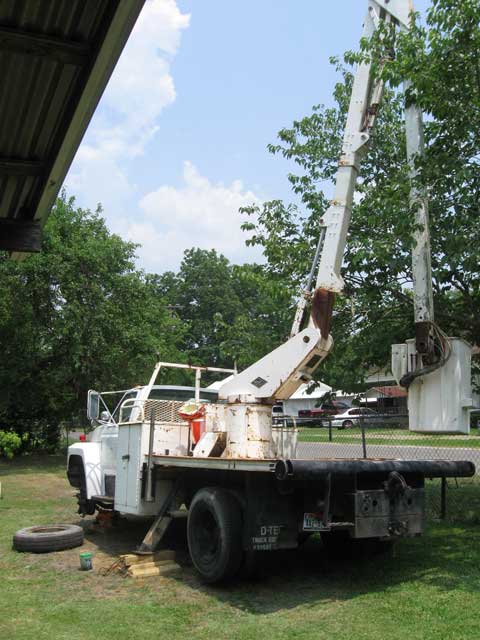 The Left-handed Fargle-snorker getting brake service

I had replaced the front left wheel cylinders…what the heck was making it so difficult?

Well, the vacuum booster is a bit different on this truck…it’s NOT on the master cylinder on the firewall like anybody that’s worked on brakes might expect, rather, it’s under the truck, behind the driver’s side seat. It’s a massive vacuum booster and a slave cylinder. Turns out the slave cylinder is leaking, but unobtrusively…and thus introducing some air into the system that was making it very difficult to get a good bleed on.

Bleeding is done with no boost…engine not running, no vacuum in the booster…

Eventually, I decided that there must be something wrong there or in the master cylinder so I started the truck up to see how the boosted brakes would feel.

That’s when all the brake fluid that had been leaking past the slave cylinder and accumulating in the vacuum reservoir got sucked into the intake on the engine and burned. LOTS of white smoke. Sigh.

I need yet another part. The NAPA boys are going to love me on this one.