So…it’s no-sleep Monday/Tuesday apparently…sitting there in the wee hours…bleary eyed and restless…I ponder…and wonder…and try to read, or write…or listen to music…without disturbing the wife anyway. One of us should remain mostly sane…

And then…of course…I begin to ponder…and wonder…why it’s getting so damn HOT in here.

Five tons of dual stage high-efficiency coolage is more than enough to keep that from happening under any circumstances Texas can dish out…so something’s broken.

Gah! Just what I need. Since the aforementioned inside unit is running, I head outside to check out the condenser.

It’s hot…and the compressor is cycling every 5 minutes for about a minute of run-time…and the fan isn’t running to cool the unit.

A screw-driver to fit through the grate and give the fan a push….and it spins free…so motor not locked…gonna be a relay or capacitor then.

Sigh. Not up to dissecting the unit in the dark…and there’d be no parts till morning anyway…so I “installed” an auxiliary/emergency cooling fan…(see the pic)…

Not so silly as it looks…it’s blowing upward…sucking air through the unit as the real fan would…and it’s actually a fan of similar horsepower (1/4) to what the real one is.

And the proof’s in the pudding…so to speak…

One: The unit is cooling, and the temperature is already dropping in the house.
Two: The airflow set the real fan to spinning and shortly it began running on its own. This tells me what’s wrong (capacitor) so it’s an easy fix once daylight (and parts) comes along.
What do you think of my solution? 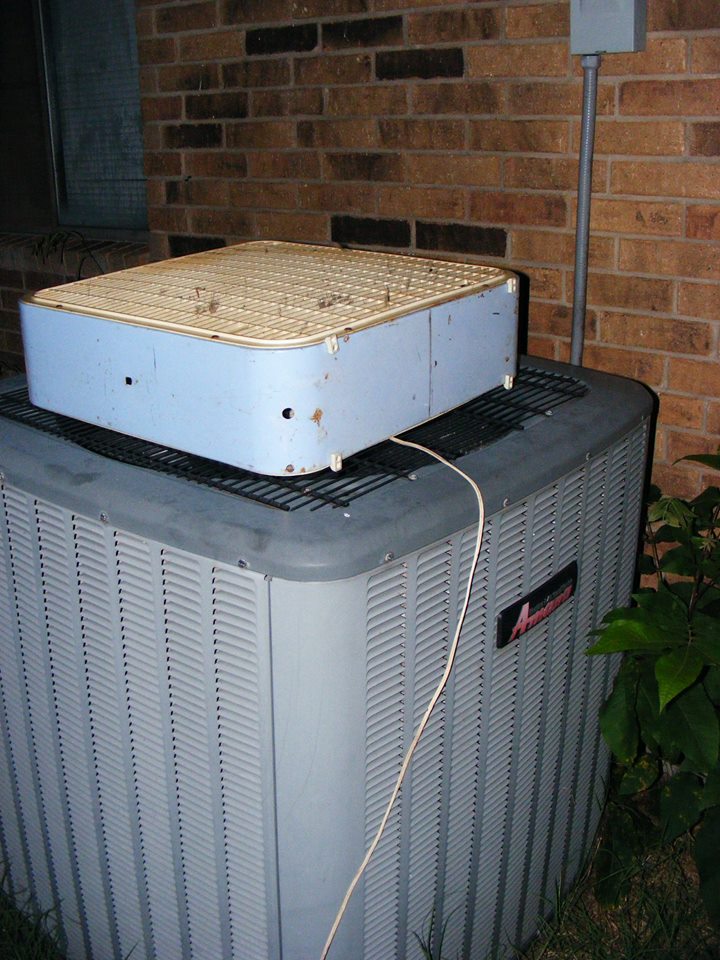 The culprit. Didn’t *look* bad…usually they swell in some form or fashion…but the behavior MUST have been the capacitor…specifically in this combo case…the fan side. 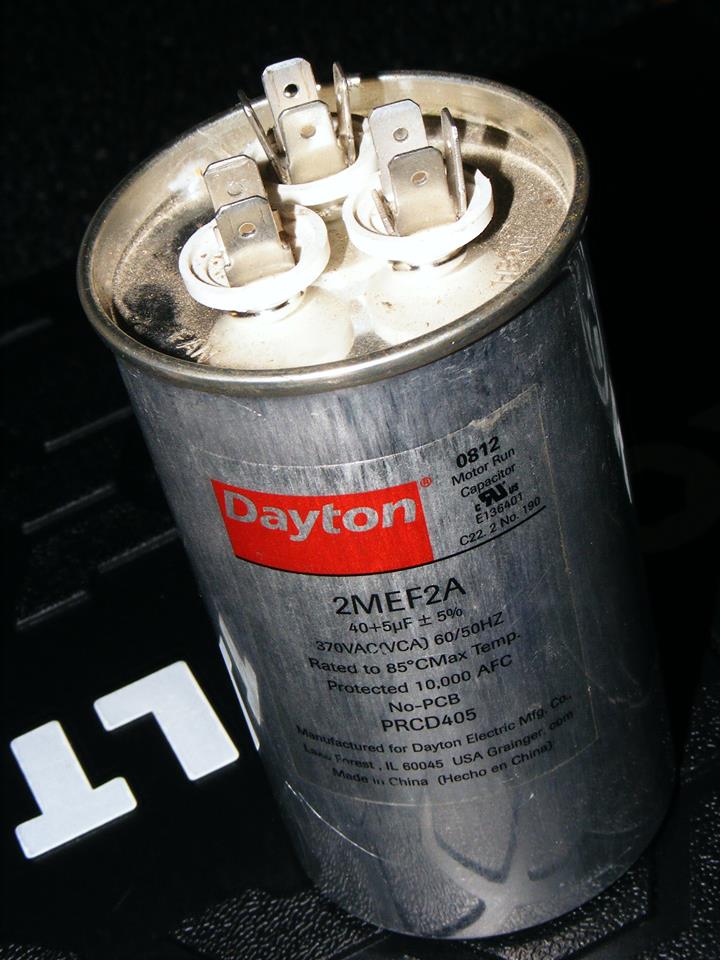 I don’t have a capacitance meter…I keep meaning to buy one…I’ve got every other kind of meter known to man…sometimes multiples of them…so…while the behavior indicated a bad cap…still *really* guessing.

Off to Grainger I go (they rock btw). They pull me a new one…and check the old one (they have a capacitance meter handy for just these cases).

Compressor side reading almost 20% low (usually replace capacitors if they are more than 10% off), and the fan side? Well, as I expected. Dead to the world.

Nice to be vindicated.

Taxes and all, the part was $23. It ALWAYS costs me more though when I go to Grainger…see…they carry Klein tools…and yanno…they’re Klein! So…I *may* have spent more on a new tool or two than I did on the part…

Got home, popped in the part, screamed “It’s alive HAHAHAHAHAHA!!! in my best Gene Wilder voice, and threw the switch.

And of course…it works. Woot!

Even with the…uh…extraneous tool purchase…I STILL got out of it cheaper than a service call alone, not to mention the 400% the service guys usually mark up caps…

One Response to Always something…