A badly done 50+ year-old addition was suffering from exposure and rot anyway, and was on the (eventual) list to be modified or somehow repaired…we just hadn’t decided quite what to do with it or managed to carve out the time (or money) to deal with it.

Basically…it was on the list. Nature came along with a bang, as she so often does, and re-prioritized things.

Note in the picture below the lack of eave/overhang…which, along with the bad construction, is what doomed this modification of the house to eventual failure. Can’t complain too much, we know the gentleman (and his brother) that this “nook” of the house was their bedroom when they were kids…and they are both over 70 now.

The storm blew the window in and quite a bit of siding loose (was already rotten). This picture is not all storm damage…it was shot after quite a bit of manual destruction. 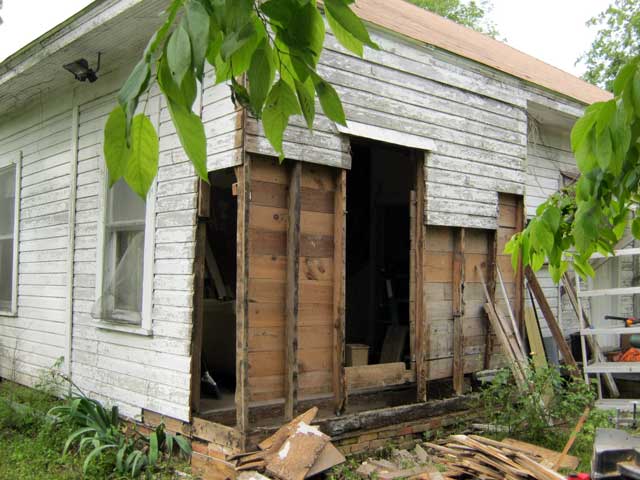 Soooo….off to work for me and my friend Mike. Basically, we removed the addition and went back to the original wall line. This restores the eave/overhang and structural integrity of the house (most of it is built like a freight train).

The below shot is after a number of hours hard work…removal and disposal of probably a 1000 pounds of wood, nails, etc…plus we removed a truckload of brick that had been used as the edging of the addition.

We then re-framed the original wall. We were able to restore the roof line/eave, which fortunately, had not been removed or we would have had to do a lot more work! 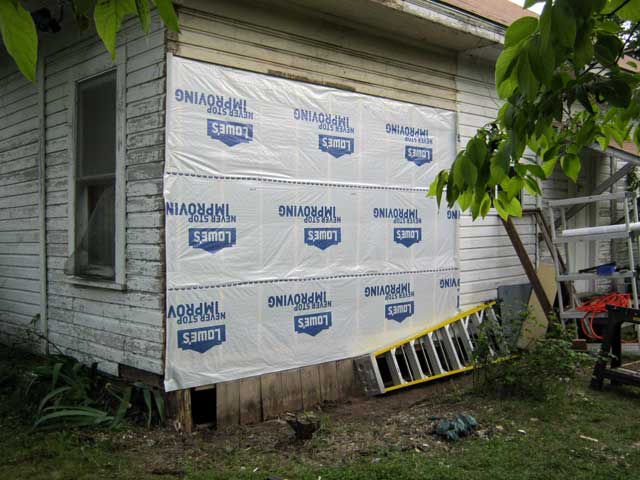 Siding’s up in this next picture. Went well. Mom and Mike chose to forgo a window in this wall for several reasons…it’s the north side, this area is a storage/hall area beside a stairway, and the window on the other wall (to the left in this picture) opens into the same space.

There was just trim left to do in this picture but it started raining on us. I gave up and took a nap. 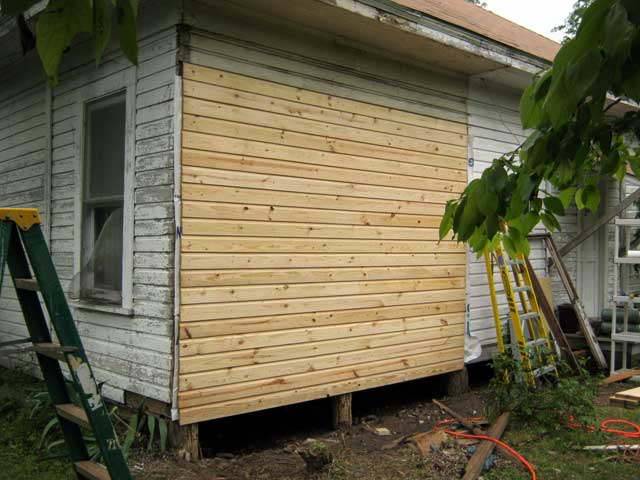 Final pic for now…Trim’s up. We tackled this after the rain…it was harder than it should have been…but anytime you’re working on an old house, that’s the way it is. Getting things to match up in a structurally functional way, as well as an appealing way, can be interesting.

It often leads you to look at your levels and squares and ask yourself, “Why do I even own these things?”

Anyway, call it done. Just needs some putty, primer, paint, and underpinning. That’s for another day. A bit of work, yes, but it’ll last for another 100 years or more with nothing more than a coat of paint every now and then. 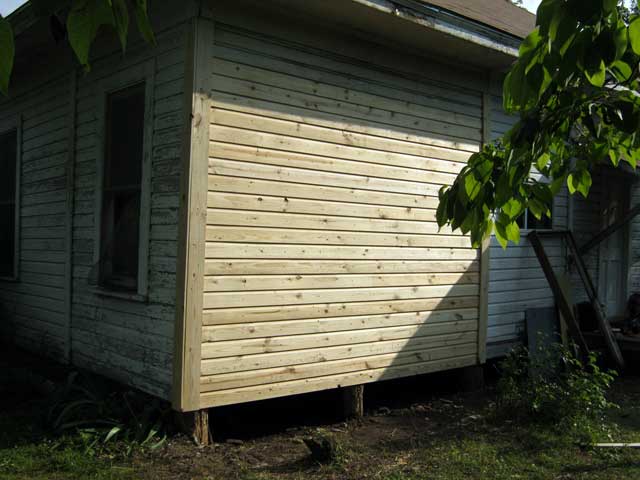 Of course…once we prime and paint this…the rest of the paint-job on the house will look even worse…so that will be the start of a LOT of other work. Sigh…

Later, after everybody had a chance to shower the dirt, dust, and sweat off, we had a pot-luck dinner with me, the wife, Mom, Mike, and a friend of Mom’s…Hot dogs with all the fixin’s (technical Texas term), mac & cheese, corn, succotash, and ice-cream. Oh, and margaritas!

Made for a fine evening, and I sure slept well.

To top the weekend off, we also, of course, spent time mowing, and cleaning up some limbs/etc downed from the storm. There is more to do, but we do what we can! Improvements, well, improve!

Author. Adventurer. Electrician.
View all posts by Daniel Meyer →
This entry was posted in Carpentry/Structure, Mom's House. Bookmark the permalink.