Who are you? (update)

Regarding the post Friday about the guy taking pictures of our house that took off in his white van (THE vehicle of choice for sex offenders everywhere!) when confronted by our house guest:

Well, turns out he was upset with the city for towing a junk car off his property (after months of warnings), and was going around town taking pictures of other people’s stuff. He apparently feels he was singled out and we weren’t because we know the code enforcement officer (he is a good friend).

Annoying really. Both I…AND the code guy have so much more integrity than that.

Knowing the code guy doesn’t buy me any favors at all. He would follow the same procedures with me as he does with anybody…and since he stops by regularly to visit, I’d have little chance of “not getting noticed.”

The dude in the van was actually shooting pictures of my bucket truck (the left-handed fargle-snorker), thinking since it doesn’t move much it must be a junk vehicle. 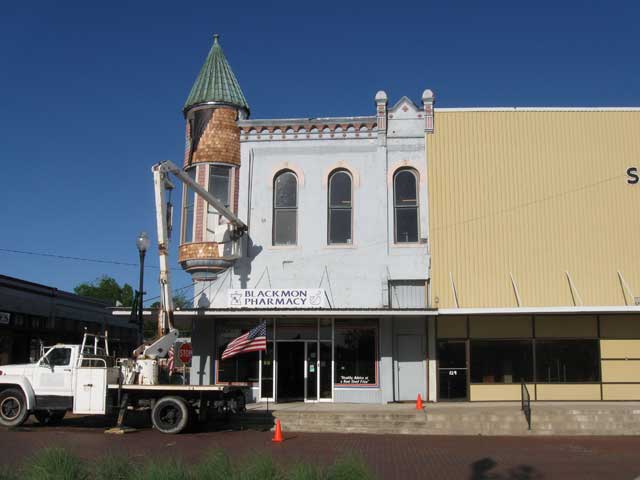 The left-handed fargle-snorker hard at work

Truth is, it moves quite a bit…usually every weekend but every other weekend at least.

I moved it this weekend to hang my banner on my evil headquarters…but that’s another story.

I move it to haul stuff from the shop, pick up stuff from the lumber yard, to mow the area, and sometimes just to run it around the block and keep the batteries charged. I think the longest it has sat is about 3 weekends…that happens sometimes when we miss a weekend or the projects just don’t take me “fargle-snorkering”.

Thing is, there’s really only one good place to park it the way our gates/fences are currently laid out so I park it in the same place every time.

Whether it moves or not though is truly irrelevant and frankly, none of anybody’s business.

It’s registered, inspected, insured, and operational so it’s not a problem with the city.

I don’t know…I guess the guy’s harmless…but really dude, if I have something that’s a problem with the city…that’s between me and the city. You need to deal with your issues. Being a dick-head and creeping out my house guests isn’t going to change your situation one little bit.

Or at least stop and talk when confronted. You might learn something new, or even make a new friend.