Those that have been following along our various adventures with old buildings might recall that we bought an 1890(ish) gothic debatable commercial building, complete with tower.

This building has been a pharmacy downstairs since it was built. It’s been rearranged a couple times, some merchandise no longer carried, the soda fountain taken out…new ceilings…you know, typical changes. It was doctors’ offices upstairs until around the 1960’s or so…the upstairs has been mostly vacant since (and thus, filled with junk from wall to wall).

Along comes us. We are, apparently the 3rd owners. We’re not a pharmacy so just as a starting point, we are cleaning it out to the core.

You might imagine some interesting things can be found in a 120 year old building…and you’d be right. Why, I have no less than 20 cash registers…from every concievable era…and printers! Printers of every make and model…printers progressing over the years! Dozens! All of them broken of course…Oh, and then there’s the cases of labels/receipt blanks left over for each and every one of the broken printers…

But that’s not the story here. The trash is the story here…something like 35 giant contractors bags full so far…maybe 3000 pounds hauled out so far…

So today, in a little used and obviously forgotten store-room (nook under the stairs) we found the ticking time bombs…

Cokes so old they had eaten through the can. 20 oz plastic bottles so old that they were smushy as there was no pressure left in them. Some glass bottles. When’s the last time they made 20 oz glass bottles? Oh, and the older style too…the tall narrow glass bottles with the crimped on metal caps? Except the caps were corroded through.

And then there’s the juice. 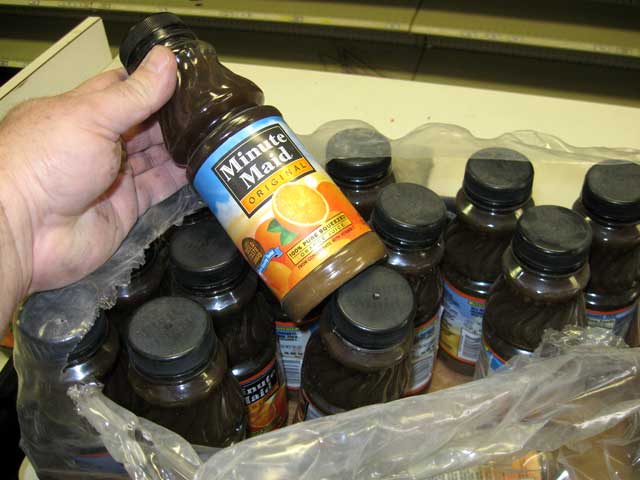 Not so orange juice 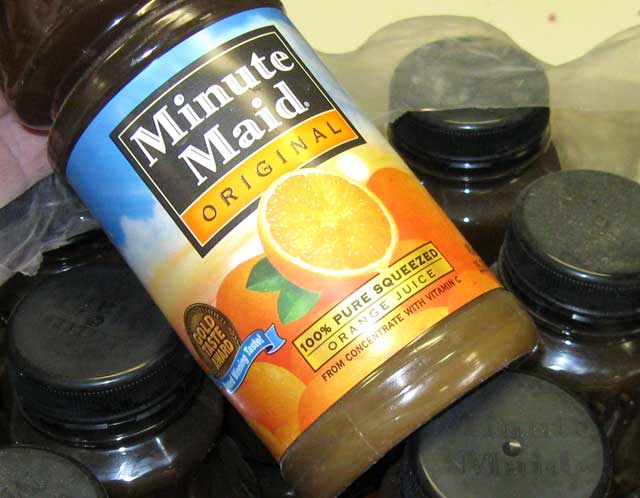 Good for what ails ya!

I think the color’s a little off on this batch…what about you? Maybe it needed refrigeration for the last decade or so?