Y’all might recall this post a few days ago about an attic hatch and some lights in the sunroom.

The mentioned LIGHTS in the Sunroom from the previous post. 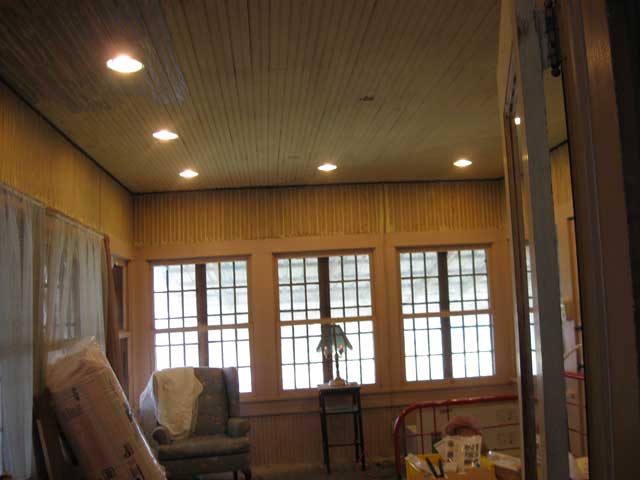 Let there be LIGHT!

Well, with my new found attic hatch-e-ness I got more wiring done this weekend.

There’s a LOT of attic in this house. I hope I don’t ever get stuck. I am not…by any definition, a small man. It would take the fire-department, jaws of life, chainsaws, forklifts, three naked women, a tazer, and 200 pounds of lard to get me out.

I got new lights completed in the utility, the ceiling fan box for the sunroom, accent light circuits for both rooms, and period fixture runs are also installed. For obvious reasons the can light covers and other fixtures will not install until the ceiling is painted.

A note about the painting…it’s beadboard so I’ll be spraying both the primer and finish coats. Why install the can lights then? Well, I need and like light. It changes the entire atmosphere of the house. Besides, masking these things for spraying is VERY easy. Got a plunger? Perfect size AND has a convenient handle that’s just the perfect length (or a broomstick will screw into one if you need longer).

Yep. I’ve done this before.

I had completely cut the knob and tube circuit a couple weeks ago and used this opportunity to remove anything that was left of it.

The wife was teasing me…as she heard me thumping around in the attic griping about various dangerous things I was finding there. Zip cord. Bare wires. Pinched wires. Old wiring laying unprotected against the ceiling, but still connected to the main knob and tube feed (the fixture had been wired back up with butt splices and zipcord). Apparently banging my head on low beams and cursing was also involved.

The zip cord was very interesting…I’m not sure when it dates from but it is very dangerous. It is SOLID core wire, perhaps 18 gauge or so, in real rubber insulation.

Over the years the rubber insulation has degraded to where it is just cracking off, but the dangerous part was really the solid core. Wires would push out of the insulation where it was bent, and they would break if bent very many times. In addition, I found some of it that had been “over-stressed” at some point…and bending the zip cord at about 75 degrees would just snap it in two. It is with great pleasure that I can say there is no more of this stuff in the house!

The ceiling fan in the Sunroom was the most work. At one time it was a single bulb/hanging wire-type fixture I would guess, and was attached to the knob and tube and a wall switch. Later, probably in the 70’s judging by the fan, a ceiling fan was installed.

It was very-well braced up in the attic with lots of wood and VERY big nails. It took crow-bars and big hammers just to dislodge that construction, which I had to move since there was no wiring box incorporated. I expect we could have hung a good sized engine block from that fan!

Anyway, I’m not sure I believe that I was griping whilst thumping around in the attic…or grumping even.

Instead…I believe anyway…I was, quite happily and with great verve ripping all that stuff out and substituting my own, new, up-to-code and safe stuff. 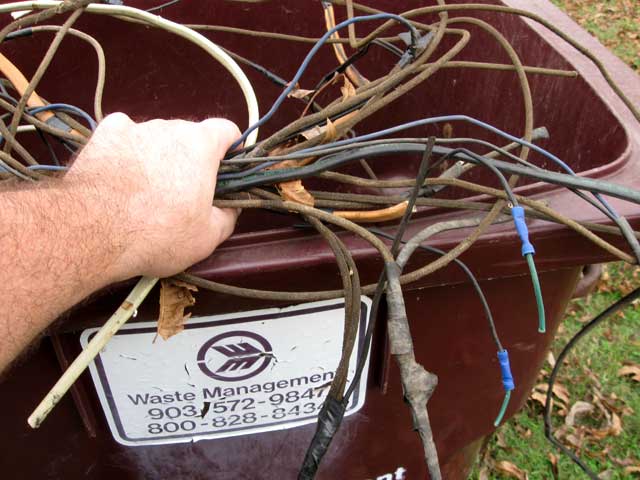 The old wiring. Not everything old should be preserved

Interestingly, the original knob and tube installation would have still been quite safe but for several factors:
1) It was never intended for anything but lighting. It had been added onto and spliced with improper methods and materials over the years. I found bad BAD stuff from several different eras.
2) Many of the insulators were broken. Not sure why, as the remains didn’t seem to be there with the broken ones.
3) As stuff had been added on, the protection (fuses) had been “upgraded” to carry the current and were overrated for the installation, even assuming it had not been improperly modified.

No worries any more though…it’s on its way to the landfill with a heartfelt “Godspeed” from me.

The switches for the Sunroom. Can lights, Victorian bowl-thing light, fan, and accent lights. 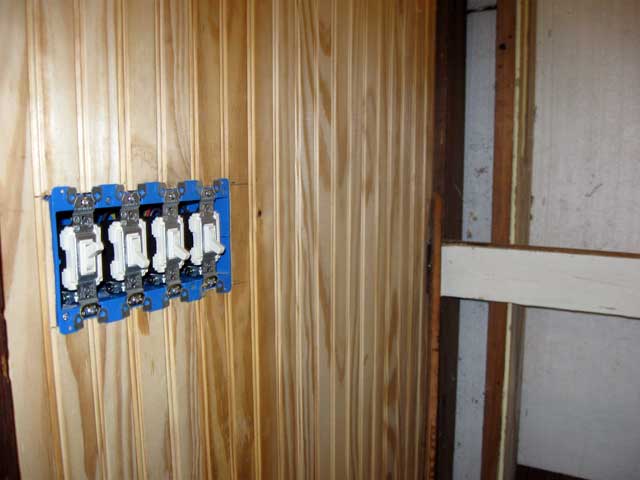 The switches for the Sunroom.

The Utility room lights. The box in the center is for the Victorian bowl-thingy that will match the one in the Sunroom, AND the one in the Mudroom (all adjacent) 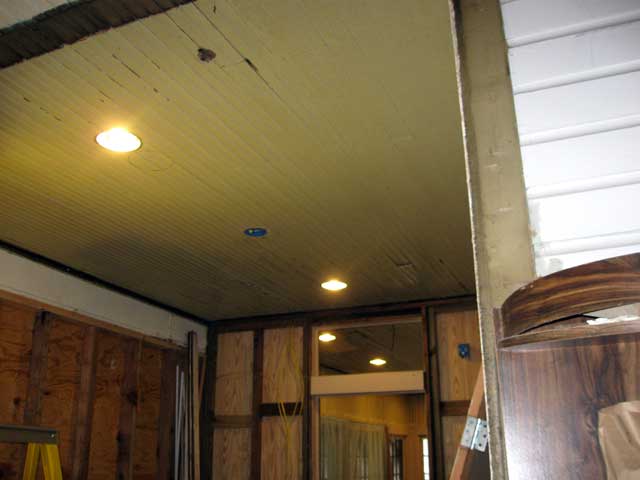 Note, cutting can lights into an old and dust/grit covered beadboard ceiling is NASTY work, and getting them right requires careful measurement and layout, making double sure that nothing in the attic interferes. Humans see lines and patterns, so it’s more important that the lights relate to each other than some part of the room, although that must be close to symmetric or it will draw unwanted attention.

Properly done, folks won’t even notice these lights, even whilst said lights happily go about providing most of the ambient lighting for the rooms in question.

A good weekend…got a lot done…yet some quirk of my personality is making me feel like I didn’t do enough. What’s with that?

Next week I’ll be tackling some plug circuits, the carbon-monoxide and smoke alarm circuits for this area, and, if I get to it…outside lights for the deck and driveway!

One Response to More Wiring…